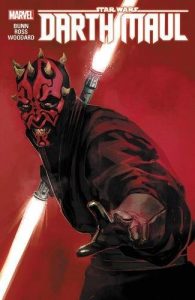 Much as I hate to admit it, Chuck Norris was wrong. Good guys don’t wear black. Bad guys do. And they don’t come much badder than Darth Maul, whose wardrobe consists of a single colour. Black.  An avatar of rage, hatred and anger, he was the perfect Sith assassin, obsessed with bringing an end to the Jedi and who was, following the mother of all lightsabre battles, dispatched* by Obi-Wan in The Phantom Menace. But you can’t keep a good bad guy down, and in Darth Maul, Cullen Bunn charts the obsidian clad, semi-psychotic, homicidal agent of the Dark Side’s first face-to-face encounter with a Jedi and the extreme lengths he goes to in order to force said confrontation.  Expressly forbidden from revealing his presence to any Jedi by his master, Darth Sidious (aka Senator, and later Emperor, Palpatine), he embarks on a hidden quest, aided by a quartet of ruthless bounty hunters, to try and satisfy his burning desire to battle his most hated enemy. It’s a mission that brings him into direct conflict with the worst criminal syndicates that the Galaxy has to offer and throws him from one fight to another in rapid succession before he is at long last granted his dark heart’s most pressing desire.  Sometimes though, as the Sith apprentice discovers, you really should be careful what you wish for, as events and circumstances, as they are rarely want to do, don’t play out in quite the way Maul envisioned.

Told in a first person narrative from the eponymous characters perspective, Darth Maul   is a Dark Side ode to the hard edged, noir flavoured detective stories of Raymond Chandler and the bleakest of Spaghetti Westerns. Maul  an avatar of all the raw emotional drives that the Sith crave in their devotees, is the absolute epitome of those feelings and they serve as his sole motivation, which while not allowing for a whole lot of character development, does mean that he’s single-minded, focussed and unwilling to let anything, or anyone get in his way. And no-one, by choice at least, does as he dispatches them if they do. In fact, he kills an awful lot of people in Cullen Bunn’s story of bloody vengeance and slaughter.  While it isn’t the cheeriest of stories and doesn’t exactly have a happy ending, if you’re more inclined toward the darker side of things and like to cheer on the Empire when they wipe out planets and crush any resistance (and let’s face it, we all like a bit of evil in our lives now and then), Darth Maul, which thanks to the galactically awe inspiring art of Luke Ross and Nolan Woodard feels and looks more like the original trilogy than the prequels, should satiate the Star Wars shaped hole in your life until The Last Jedi is unleashed on the world. This is the book that you’re looking for… Tim Cundle

*Not being au-fait with the minutia of Star Wars mythology, I don’t know if someone has found a way to bring Maul into the fold after he was so unceremoniously chopped in half. I hope they have. Because he was the brooding, homicidal bad guy that you loved to hate.