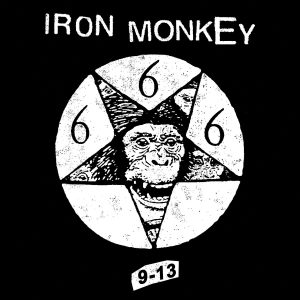 Some things are sacred.  Especially in the Hardcore scene. And Iron Monkey were, and are, toward the top of the list of hardcore sacred cows. They were the perfect band for the time in which they existed. They were a blitzkrieg, harsh, heavy attack unit that descended on clubs everywhere, blew them apart, destroyed their audiences and thanks to fate being a cruel, heartless motherfucker and taking Johnny Morrow before his time, had an all too brief life. And now they’re back, condensed to a three piece, with a new album but without their acerbic frontman and the guitar onslaught of Dean Berry and Stu O’Hara (yeah, I know they weren’t founding members of the band and two of the original crew are in this line-up, but still…), and if I’m brutally honest, even though I wish they’d chosen a different name and weren’t using Iron Monkey … I really dig the hell out of 9-13. It’s everything Iron Monkey were, and are again, crushing, intense and furiously heavy, it steamrollers over you time and time again, back and forth, to ensure that you’re completely flattened and broken.  It’s the audio equivalent of paying a high class hooker to blow cocaine up your rectum and  slowly tenderise you with a thousand shots from a tiny hammer while drip feeding you Makers Mark. It’s mesmerising, almost like being called to by Sirens of Doom laden Hardcore, who, when you answer their song, shank you with a prison shiv and leave you to bleed out while they rifle through your wallet. And it is glorious…  Tim Cundle