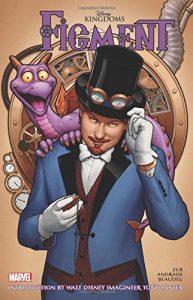 I could probably count on the fingers of both hand and the toes of one of my feet (don’t ask me to use both feet, because that’d involve big numbers and that’s when things get confusing) the number of things in the world as instantly recognizable as the official mascot of Epcot’s Imagination Pavilion and the star of Journey into Imagination, Figment the purple dragon. While I’m aware that most folks aren’t Disney nuts and don’t share my obsession with Walt’s legacy, I’m sure that if they stumbled across a purple dragon, they’d either think they were really, really high or instantly understand what he’s supposed to represent*. That is, of course, the pure, unfiltered power of imagination and magic. And his initial foray into the four colour world captures everything that Figment is, was and will always be.

Richard O’Brien once said “Don’t dream it, be it” and his words became a beloved catchphrase that has captured the imagination of a generation; and that mantra, just as it does with the Rocky Horror Show, lies at the core of Figment, albeit in a much more family friendly way. Jim Zub’s story revolves around the theme invention, an idea central to all that Figment embodies. Beleaguered scientist Balrion Mercurial, who later becomes the Dreamfinder, invents a device that casts him, along with Figment, his imaginary friend made manifest (brought into being by the same device), into a bizarre world full of strange and deadly peril that’s been shaped by the deepest recesses of his mind. And while they explore their new domain, back on Earth, Mercurial’s boss, driven solely by the application of pure science, when trying, and failing, to use the same device accidentally summons a legion of clockwork automata, the Articulate Army, who seek to control the world through order and eliminate the chaos of creativity, individuality and imagination. The only hope of rescue that Earth has lies with the Dreamfinder, Figment and their new otherworldly friends, but only if they can find way a way to get home and save the day.

Figment is a steampunk powered fairy-tale influenced by Wells, Verne and Carrol, The Phantom Tollbooth, Alice in Wonderland, Pete’s Dragon and the marvellous childhood tales of Richard Scarry in equal measure. It’s pure escapism as its absolute finest and filled to bursting with likeable, endearing characters and a plot that’ll make you forget whatever it is that ails you by dragging you into the realm of imagination and dreams, the place where anything is possible. But Figment is so much more than just a story, as it also explores the conflict between imagination and logic, the two seemingly opposing driving forces of science that need to work in conjunction to progress and further humanity and emphasizes that dreamers and theorists are just as important as the immutable laws by which the Universe is governed. Laws that only hold true for as long as our understanding of them permits them to do so and the more we dream about endless possibility the closer those dreams come to being part of our reality.  And thanks to the artistic wunderkind team of Andrade and Beaulieu, Figment is beautiful to behold and is dripping in sumptuous detail and gorgeous colour, which only adds to the ethereal, timelessness of Jim Zub’s magnificent adventure. Welcome to the wonderful world of imagination…  Tim Cundle

*If you do start seeing purple dragons and you’re not at Walt Disney World, then it’s probably safe to assume that your medication isn’t working.