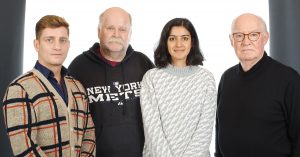 Created by Chris Boucher (who also worked on Blake’s 7 and the Doctor Who TV series), Star Cops is set in the near future (2027) when man has began to colonise space. The series follows Nathan Spring (played by David Calder), the new Commander of the International Space Police Force, non-affectionately known as ‘Star Cops’. Providing law enforcement for humanity spreading among the stars, Star Cops was a tough-talking, multi-national and edgy interpretation on the human race’s future in space.

Nine episodes of Star Cops were broadcast on Mondays on BBC Two from 6th July to 31st August 1987 until industrial action withheld the tenth episode and the series was discontinued.

“I was working at the BBC when Star Cops was made,” says producer David Richardson. “So I got to read all the scripts, and watched much of the recording in studio. I fell in love with the series and its magnificent cast – but I could never have suspected that 30 years later I would be producing brand new episodes!

“Mother Earth is our take on what a second series on TV could have been. We’ve imagined a bigger budget, more action and a new theme tune, but we’ve also kept the scripts authentic to the original show. And they have a dangerous new adversary to fight, a thread which will weave throughout these episodes.”

So make a note on your wish list! Two new box sets of Star Cops will be released next year: part one is due for release in May 2018 and part two in December 2018. A total of eight individual episodes which will form one overall story under the title, Star Cops: Mother Earth.

The four adventures in the first box set are:

1.1 One of Our Cops is Missing by Andrew Smith

1.2 Tranquility and Other Illusions by Ian Potter

The adventures contained in the second box set will be made known soon.

The original cast of Star Cops, David Calder (Call the Midwife, Motherland, Inside No 9), Trevor Cooper (This Country, Downton Abbey, Doctor Who) and Linda Newton (All Saints, My Two Wives) are all set to return. Also joining the Star Cops for this twenty first century edition are Rakhee Thakrar (Eastenders, Doctor Who) and Philip Olivier (Brookside, Doctor Who).