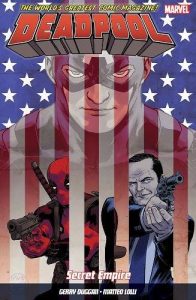 When all of the smoke eventually clears and all of the dust settles in the inevitable fallout from Secret Empire, the heroes caught up in Steve Rogers web of deception and who did his bidding will have a lot of questions to answer and tarnished reputations to rebuild.  For some of his puppets though, it’s going to be next to impossible to return to the fold, because some of the things that they were asked to do, and did, for the “common good” by Captain America went beyond the pale. And right at the front of the line of the “soldiers” who did Cap’s bidding, was Deadpool. Of course he was. I mean, would we expect Wade to be anywhere else? After all, he was recruited into the Avengers by a pre-Nazi super-agent and Hydra Supreme Leader Steve Rogers, who right from the start told Deadpool he was going to ask him to do the things that others weren’t capable of doing and couldn’t be asked to do in even the most arduous of circumstances.

From the moment he joined the team, Wade was Captain America’s black op’s guy, so when Steve comes calling again and asks him to do something particularly distasteful, Deadpool does what any deniable mission operator would do when he’s given an order. He falls in line, follows orders and kills who he’s told to kill. Even though the target he’s given is on the side of the angels, someone close to him and even closer to those he cares about.  This makes Wade life even more incredibly difficult than it already is and the fallout from the mission pushes him, in a moment of madness even for Deadpool, to do the absolute unthinkable, a moment that tears his world apart and brings it crashing down around him.  If you thought things were bad for Deadpool before Secret Empire, then folks you ain’t seen nothing yet, as this time the fan is turned up to full speed and when the you know what hits it, it’s sent spiralling in a hundred different directions and completely covers everything and everyone that Wade cares about.  And even when Deadpool realises that he’s playing on the wrong team and that Cap isn’t the hero that he thought he was and he tries to do something to throw a spanner in the works and help save the day, it goes the same way that everything always does for him. Disastrously wrong.

I’ve said it before and I’m sure that I’ll say it again; Gerry Duggan is on fire at the moment. Well, not literally, because that would be all kind of horrific and painful for him, but when it comes to guiding Deadpool’s destiny and authoring his life, Duggan is literally smoking. His scripting and plots are tighter than tight, his characterisation and interaction between the players is superb, his dialogue sharp, funny and on point and it honestly feels like Duggan can’t put a foot wrong as he forces Wade through ever increasing levels of misery and misfortune.  Teamed with the “Hot-damn-these-guys-are-good” artwork of Hawthorne and Lolli, Duggan has elevated Deadpool to hitherto unknown regions of wonderful catastrophe and ruin, which makes every single panel and page an absolute joy to read. Hello darkness Wade’s old friend, he’s come to talk you again…  Tim Cundle