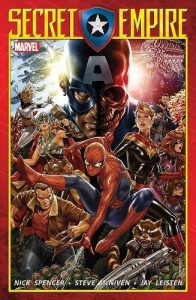 By now, it’s common knowledge that the bastion of freedom and equality and the living embodiment of the ideology that America was founded upon, Steve Rogers, was a fraud. That he was a high level Hydra agent waiting for the perfect moment and flawless confluence of events that could be wholly exploited to his advantage in order to emerge from the shadows and claim first the US, and later the world, for Hydra. Because, as we all know all too well, the greatest trick that the devil ever pulled was convincing the world that he didn’t exist. And Steve Rogers spent more than half a century doing exactly that by earning the trust of every man, woman and child in the world and reassuring them that he, more so than anyone else alive, believed in the tenant that everyone, regardless of who they were or where they come from, could aspire to be more than they ever thought they could, and anything that they wanted to, be.  So, when he finally aligns all of his pieces on the board and manages to quell the biggest threats to his agenda in the opening moments of Secret Empire America is “conquered” in a relatively bloodless, and legal, coup and meekly falls into Hydra’s embrace.

As well as charting America’s downfall as it’s slowly choked into total submission by its new fascist government, Secret Empire tells the story of the men  and women who fall victim to the regime and those who decide to fight back and give everything they can, and are, to overthrowing their former champion and his neo-Nazi cohort. It’s the story of Captain Marvel and the Guardians, trapped outside of Earth by an impenetrable shield battling a Chitari invasion horde while desperately trying a find a way home. It’s the story of the superheroes, and citizens, of New York imprisoned in the Darkforce Dimension to prevent them striking back against Hydra and their search for a way to escape their gaol. It’s the story of the last enclave of the super community leading the resistance against tyranny, the obliteration of Las Vegas and how a nation finally, despite nearly impossible odds, finds the will and courage to stand against a dictatorship disguising itself as a benevolent force for good and the lengths it’ll go to subdue the masses under its control. And it’s the story of a scared, confused little girl who used to be a cosmic cube, who tried to change things for the better but having fallen hook line and sinker for the Red Skull lies, with one simple, seemingly innocuous tweak of reality, turned the world upside down.

Secret Empire is grandiose story-telling on a truly epic scale, and like the mightiest of oaks it grows from the smallest of acorns, or more accurately a simple change in the established order of reality. Refusing to spare its audience sensibilities, Secret Empire is often shocking, savage and brutal, all of which however, are absolutely necessary given the context, and for the continuity, of the story being told. Possessing more than its fair more share of jaw dropping moments, Secret Empire refuses to compromise and before it reaches its finale, a few much beloved and long established mainstays of the Marvel Universe meet their makers in gruesome fashion. But as it’s essentially a war story about the bloody conflict for the future of America, the deaths aren’t entirely unexpected, as people die in war and death, being the great equaliser, doesn’t spare anyone because their profile may be a little higher, and their skill set a little deadlier, than that of the average Josephine or Joe.

Spencer’s story is also a modern allegory of the increasingly fraught political tensions that exist in the world and how easily any country could fall victim to the machinations, duplicity and fear mongering of our would-be rulers. It’s also an exploration and examination of the duality of humanity and our species inherently flawed nature, exemplified within the narrative by Steve Rogers “fall from grace” and his personalities struggle for control of his soul. Because if the “best of us”, the epitome of all that each of us strives to be, can fall victim to the darkness, how easily could that happen to any of us?

Backed by an artistic cohort of the best of the best that ensures every page not only grips with you with its literary power, but also sears its way into your imagination through its gorgeously illustrated and detailed panels, Secret Empire is an informed, intelligent, engrossing and slightly terrifying tale that lurks long in your conscious, and is incredibly timely, apt and appropriate given the world in which we find ourselves living.  There’s a Chinese saying that’s part curse and part compliment and is meant to convey the often the frightening nature of life, that states “May you live in interesting times”, and Secret Empire captures the essence of that perfectly in its scarily realistic reflection of the age in which we find ourselves. Incredible… Tim Cundle