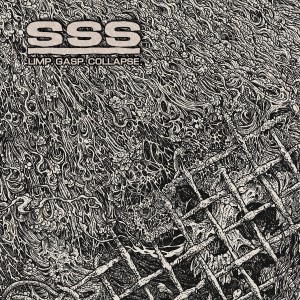 SSS – Limp. Gasp. Collapse CD (Prosthetic)
Doesn’t matter who you ask, it seems as though this year has been a tough one for most folks, a herd of hard times, pain, anger, loss and sorrow, and it’s fitting that as it finally draws to a close, L thrashers SSS have released the soundtrack to exorcize the demons and slam away the misery that that the last twelve months have seen fit to inflict. ‘Limp…’ is probably the hardest and at times fastest album of SSS’s career, and feels like it’s been fuelled and powered by the collective pent up frustration and hatred of an entire scene, giving its audience a channel to thrash away their torment and while the caustic, driving riffs, searing vocal attack and pulverising rhythmic onslaught sear and burn away any last vestige of sadness. This is everything modern thrash should be, a head on collision between hard as nails mosh parts and breakdowns and insanely catchy smash your skull to smithereens speed laden, chugtastic anthems, that are mashed together in glorious collision of Beyond Possession, DRI, The Boneless Ones, Suicidal Tendencies, Anthrax and The Accused crossover madness. Thrash hard, thrash well and let SSS be your guide… Tim Mass Movement