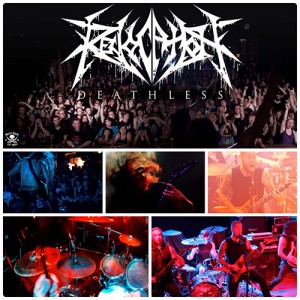 REVOCATION spent a few days on the road with acclaimed director Dave Brodsky, who was enlisted to shoot the band’s new video “Deathless”. The track, which is about the “oath of blood” and “a pact of the initiated” of being a touring band, is something the band wanted reflected in a video. Brodsky delivered just that: “Deathless” gives fans a taste of what it’s like on the road, from the daily grind of loading gear to the excitement of being on stage. Watch “Deathless” now, exclusively at metalinjection.net HERE.

REVOCATION have spent the last eight years converting fans to their cause with four full length albums, an EP with Scion AV, and a charismatic live show led by guitarist/vocalist Dave Davidson. The Boston-based band also features the staggeringly talented lineup of: Dan Gargiulo on guitar, Brett Bamberger on bass, and Phil Dubois on drums. REVOCATION has firmly been established as one of the genre’s finest and continue their campaign as part of the Metal Blade Records roster. “Deathless” was recorded with acclaimed producer Zeuss at Planet Z studios in Massachusetts.

During the recording process, the band shot a series of videos documenting their work on “Deathless”. All three episodes can be seen now at metalblade.com/revocation.

REVOCATION are currently on a European tour with label mates Cannibal Corpse and Aeon. Following the European dates REVOCATION will head to China for a run of dates, followed by a trip down under to Australia for a string of shows.