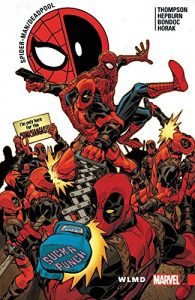 Before parenthood and what now seems like a lifetime ago, I worked in PR and was paid to come up with attention grabbing headlines whose sole function was to get writers to focus on whatever record, or band, I was pimping that week. I was actually pretty good at it, but there’s only so many hyperbolic soundbites that you can create for a pittance before the shekels start to feel like silver pieces and your pesky conscience begins to get in the way. So why do I mention this now? I guess because when I tried to describe WLMD to my wife, who doesn’t read comics and absolutely refuses to even entertain attempting to do so lest it set her on the irreversible path to geekdom, I found myself imitating the voice over guy who used to appear on every eighties video trailer, as I said “To save his best friend from dying in the future, Deadpool must travel into the past and warn himself about a plague of homicidal robots. And then kill them”, which catapulted me straight back to my press officer days. Wait a minute though, that makes it sound like I think WLMD is just another throwaway, four colour tale doesn’t it? And that just isn’t true.  No sir, that isn’t true at all.

Sure it’s an action heavy story of superheroes desperately battling an army of self-aware life model decoys who have their own world threatening agenda despite “appearing” to be under the control of a previously, pretty minor league, supervillain, which in the normal course of events, should be enough to convince anyone that it’s more than worth reading. But then there’s the added attraction of time travel and the hurtling back and forth between present and the future, hence the whole trailer voiceover thing, which again, should be enough in its own right to make you want to pick WLMD up. Because who doesn’t love time travel? It’s a fundamental staple of genre fiction and a comic plot favourite and if it’s good enough for the Doctor, then it’s good enough for you, me and every other fanboy and girl in Geeksville. And then there’s the stars of the story and their ever evolving relationship, the afternoon soap opera infused drama that plays out against the backdrop of them fighting an army of murderous androids. Will they kill each other? Won’t they? Will Spidey turn Wade over to the law or will Wade chop Spidey into teeny tiny arachnid shaped pieces? Who knows? Um, well I do because I’ve read the book, but if you want to know, you’re going to have to read WLMD.  That’s just how it works. If you want to know what happens, you have to read the book.

And finally, there’s the plethora of laugh out loud gags and fourth wall humour that we’ve all come to know and expect from the super-powered odd couple which keeps it rattling along at a V-8 powered pace. Oh, and I nearly forgot, there’s a major revelation for Spidey, which I swear is worth the cover price alone and is bound to have some kind of major impact on his life. I have no idea what, but it will be big. Really, really big.  Robbie Thompson turns everything up to eleven, the plots, characterisation, dialogue and the G..P.P. and let’s Hepburn, Bondoc and Horak get on with doing that thing that they do, which is create page after page of beautifully illustrated, exquisite art. So no, WLMD isn’t just another here today, gone tomorrow book, it is, if I may borrow a phrase from Soundgarden, Ultra Mega Okay. And that’s the bottom line, because Seattle’s finest said so. Tim Cundle