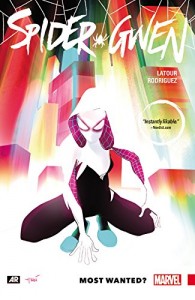 Having been knocked for six and then some by the events of ‘Spider-Verse’, my psyche was able to mend itself enough between the end of that worlds-shaking event and re-appearance of what was arguably the most brain-shaking moment of that Spidey-centric game changer. That’s right boys and girls, Spider-Ham is back and he’s here to help Spider-Gwen try to find some sort of balance after battling her way through the arachnid multi-verse, and come to terms with who she was, is and will, hopefully, become. Well, sort of. See, it’s more like an extended cameo after Gwen suffers a significant head injury, and Ham appears as her mind tries to fix itself and come to terms with what’s happened to her and it. That said, even Ham, as awesome as he is, can’t steal Gwen’s thunder and in ‘Most Wanted?’ she becomes the hero, and travels the similar path to the one that Peter Parker did in our Universe. Or is that the Marvel Universe? With all this multi-verse stuff going on, sometimes it’s difficult knowing who belongs where, which place is which and why way is up and which way is down. But anyway, I digress. Now where was I? Oh yes, Spider-Gwen. Now that she’s back in her own world, there’s a lot to come to terms with as she tries to figure out the whole hero thing while trying to have a personal life. A personal life made even more difficult when The Kingpin’s lead counsel, numero uno hitman and all round go to guy, Matt Murdoch, takes slightly more than a passing interest in New York’s latest spider-powdered hero.

No, there’s no need to do a double-take, and yes, I did say that Matt Murdoch works for The Kingpin. See, in Gwen’s world, everything is similar, but at the same time, it’s also a lot different. I guess the fact that Gwen became, well, ‘Spider-Gwen’ and Peter Parker became The Lizard, and in doing so, died, should have been my first clue. What can I say? I’m a slow learner. Even though things are completely different, they’re still sort of the same which means that Gwen’s life is just as messed up and crazy as our Spidey’s is.  With her band on the verge of breaking into pieces just as they’re about to hit the big-time, the Vulture pursuing her remorselessly, a police task force being led by Frank Castle hot on her heels, her dad discovering her secret identity and being coerced into sharing and keeping it secret and the whole Murdoch / Kingpin thing, Gwen’s got a lot to deal with in ‘Most Wanted?’ Jason Latour’s reimagining of Spider-Man’s world is a masterclass in effortless story-telling, one that’s full of snappy dialogue, vivid characterisation, punchy story-lines and plots and enough personal drama for the even the most demanding of web-heads to sink their fangs into. The wonderfully touching moment that Gwen shares with May Parker, which is both melancholic and uplifting, in which the latter puts everything into perspective for the former is not only a  perfect example of why Latour is widely regarded as one of the best there is, but why he’s the perfect writer for this book. He gets it. He gets what Gwen is going through and what she’s about to go through, and he makes his audience, an audience already sold on Robbi Rodriguez eye-ball pleasing retro-classic art, care about Gwen, her life and all of the people tangled up in it.  Move over Peter Parker, there’s a new Spider in town… Tim Mass Movement