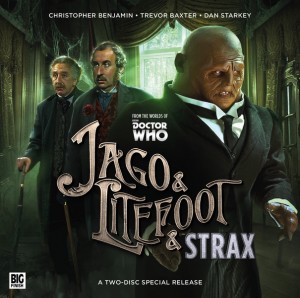 Contrary to what the most fervent devotees of Empire tried to tell those that they sought to bring under Blighty’s global umbrella at the time, Victorian London  wasn’t really all that big. So it’s a little surprising that the Paternoster Gang and the dynamic detecting duo of Jago and Litefoot hadn’t crossed paths, or even been aware of each other’s efforts in the fight against the forces of darkness prior to ‘The Haunting’.  But such are the machinations of the Whoniverse and its many layered laws concerning the right time and space for everything.  However, that having been said, this time the many interwoven tendrils of fate surrounding the rum and bizarre deem it fit that that they should happen to bump into each other, figuratively not literally (although Strax being Strax, there is inevitably some bumping involved, although it’s mostly his fists and the faces of drunken would-be brawlers that bump into each other) while investigating seemingly unrelated aspects of the same torrid affair.

Having already briefly made his acquaintance during a particularly lively evening at The Red Tavern, Jago and Litefoot stumble across an unconscious Strax While pursuing leads in their latest case, one that centres round a set of particularly gruesome murders.  After tending to the wounded Sontaran, both parties are forced to conclude that they are chasing the same investigation, an investigation that leads them both to one of the most haunted, mysterious areas of London.  In the aftermath of a confusing identity crisis, initiated by Strax, our intrepid investigators soon find themselves forced to spend an evening in a “haunted house”, an evening that takes a most terrible turn when the other worldly origins and dreaded schemes of their foe are finally revealed. Once again, the only things standing in the way of wholesale death, destruction and all manner of bally awfulness are George Litefoot, Henry Gordon Jago, Miss Ellie Higson and a rather odd looking fellow named Strax.

In bringing together the Doctor’s Victorian allies, ‘The Haunting’ has, in essence, become something of an all-star team up, the sort of story that every rabid, die-hard Who fan fantasises about. And thanks to Justin Richards’ magnificent script and the incredible performances of the cast, it’s better than I ever dared dream it could be.  It’s an adrenaline soaked, laugh out loud funny, gung-ho adventure that seamlessly combines Strax’s perpetual “fish out of water” persona with the endearing eccentricities of Henry and George, effortlessly transforming the inseparable duo into a titanic trio. Every single hope and expectation I had of, and for, ‘The Haunting’ has been exceeded ten-fold and it is, I’m more than happy to be able to say, brilliant. Absolutely, totally and utterly brilliant… Tim Mass Movement