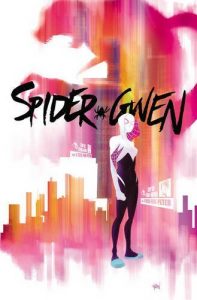 A far wiser man than I once said “You can never have too much of a good thing”, and I’m beginning to think the author of this cliché was, in fact, a prophet overcome by images from the future – a vision of Spider-Gwen.  This Spider-Woman from an alternate Earth, who in her reality didn’t die at the hands of Green Goblin and instead was bitten by the radioactive spider that granted Peter Parker his powers in the established Marvel Universe. Gwen Stacy, is a part-time rock star in the making and, much to her chagrin, destined to become a full time super-hero. So whilst Gwen became Spider-Woman, Peter Parker (obsessed with the arse-kicking arachnid) became, in an insane bid to emulate his hero, the Lizard. Unfortunately for both alternate Pete and Spider-Gwen, the Lizard fell in battle, the former dying, accidently, at the hands of the latter. This becomes the cross that Gwen’s forced to bear, as the knowledge that she was “responsible” for the death of her best friend is the primary motivating force that drives Ms. Stacy to become the best Spidey that she possibly can. Which, as Greater Power begins, is exactly what she’s attempting to do.

Becoming a better hero as it turns out, is a gradual process and despite regularly travelling across the multi-dimensional gap in order to seek advice from a heavily pregnant Jessica Drew, Gwen finds herself on a complicated, difficult journey to reach the dizzying heights of publicly accepted superherodom.  Just like it is in her “secondary” career, rock-n-roll, it’s a long way to the top if you want to be a wall-crawling, web-slinger.  Especially so when most people still think that she murdered poor old Pete. Greater Power throws Gwen in at the deep end with only a pair of lead weights for company, as when the Lizard returns, she’s hurtled headlong into a mystery that forces her to fight another old friend and sees her teaming up with her universes Captain America while trying to convince the world at large that they’re wrong about her and that she really is one of the good guys. And with her dad crusading in her corner, some unexpected interest from a rather surprising and unexpected source and a gradual thawing of at least one member of the taskforce assigned to bring her in, becoming the hero that she knows she can be, might not be as impossible as it once seemed.  Jason Latour’s vibrant, fast, dizzying and densely plotted story is packed full of quick-witted dialogue and the sort of perceptive and intuitive characterisation that the long established Gods of the ever evolving literary four colour universe could only dream about writing or creating. Coupled with Robbi Rodriguez and Chris Visions amazing art, Latour’s gift for story-telling ensures that Greater Power hits the ground running, never looks back and leaves the majority of its competition floundering in its wake. If this book isn’t already on your pull list, phone, email or run to your local comic shop and make sure it’s added to the top spot immediately. Like, right now. Yeah, it really is that good. Seriously, it really is. There’s a new Spider in town.  She’s called Gwen Stacy… Tim Cundle