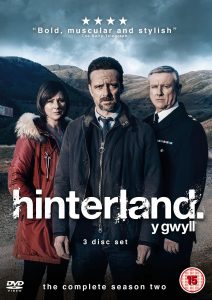 If the men and women who study human behaviour and interpret intersecting social and media trends are to be believed; as a species, our ability to concentrate, think independently and interact with each other is rapidly decreasing. All of this has been measured by our increasing reliance on social media, the modern preference for spending time online rather than with other people and the way in which music, art and culture are gradually being dumbed down in order to generate bigger market share, ratings and profit for the entertainment folks who are already drowning in more money than they could ever spend in a thousand lifetimes.  So when a quiet, contemplative, character driven, plot heavy show that demands from its audience a modicum of intelligence, and the ability to focus, like Y Gwyll comes along, I, and the thousands upon thousands of others mourning the loss of more thought provoking drama, rush to watch, and absorb, every single moment of it. Some of the shows that are carved from the same ilk as Hinterland start off well but lose their drive, becoming lost in a confusing mire of overly complicated, intersecting plot developments and story arcs. But that isn’t the case with Y Gwyll, which if anything is more balanced in its second series than it was in its first; it’s razor sharp, and often incredibly raw, storylines cutting far closer than they did in its debut season.

Billed as being part of the Nordic Noir stable, and sharing a common thematic bond with shows like Wallander, it’s a brooding, dark series in which the lonely, quiet, weather blasted heaths, achingly beautiful, but tired, coastline and wild forestry are as much as part of its identity as the cast. Picking up in the aftermath of the tragic finale that ended its initial run, Hinterland sees DCI Tom Matthias (Richard Harrington) returning to duty after a period of personal leave, to once again puzzle his way through a series of haunting cases of murder, betrayal, revenge and unrequited love at the behest of his superior officer CS Brian Prosser (Aneirin Hughes), and with the aid of his ever dependable second in command, DI Mared Rhys (Mali Harries). As the cases progress, each of the character’s lives become more complicated as more of their individual histories gradually bubble to the surface and their relationships become more complicated (exemplified by the simmering, growing sexual and professional tension between Matthias and Rhys), adding an additional layer of intrigue to this already, hugely, enjoyable series.  While there are plenty of “villains” in Hinterland, there are few heroes. It focuses on the incredibly fragile moral line that separates right from wrong and good from evil; a line that it’s incredibly easy to stray from and fall over and even the most noble of its characters are subject to the emotional whims that are part and parcel of being human. It’s a show about broken people doing their best to stay on the right side of that line; cleaning and healing their wounds while picking up after the mess made by other broken people as they blunder through their own lives inadvertently destroying the dreams, hopes and aspirations of others. Driven by the incredible central performances of Harrington, Harries and Hughes, Hinterland is one of those all too rare televisual beasts, a show that just, like the finest of wines, gets better and more full bodied and rounded with age. Croeso I Y Gwyll… Tim Cundle

HINTERLAND Series 2 is released on DVD & Blu-Ray Monday 30th May by Nordic Noir & Beyond.