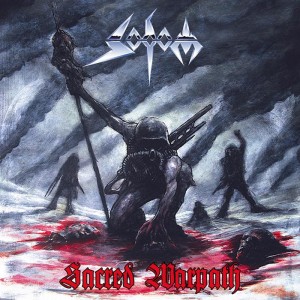 Sodom – Sacred Warpath CD (Steamhammer/SPV)
So, originally written for the new Sodom album… title track ‘Sacred Warpath’ is a real first-class tune; proving Sodom are in a really good place at present by all accounts. From the opening scream and solid thrash rhythm the sounds instantaneously recapture the old school Sodom feel once pervade – a heavyweight teutonic soundtrack to a thrash/death metal pinnacle. Tom Angelripper and co have always managed to turn out a fair slab of metal, but over the years some has not been as gripping as earlier invigorating titles ‘Obsessed By Cruelty’, ‘Persecution Mania’ and Agent Orange’ but with this song alone they recapture that atmosphere, no wonder an earlier release seemed ideal. With almost black metal vocal rasps (returning the edge of rawness the band once carried), churning, malevolent choruses and a driving rhythm, the harshness and thrash metal intensity is clearly focused throughout the 5.47 minute metal monster. Accompanied with a trio of live tracks, also including a cleverly cultivated Ramones intro it’s a great way to fire up the Sodomy and lust sure to follow. Available also as a really limited vinyl single and 10” clear vinyl it’s treading waters with the metal underground once again. This will become a sort after thrash classic. ‘Sacred Warpath’ is aggressive, it’s sincere, and pleasingly the sign of evil is back. If only Slayer’s new album were to sound this good. Mark Freebase