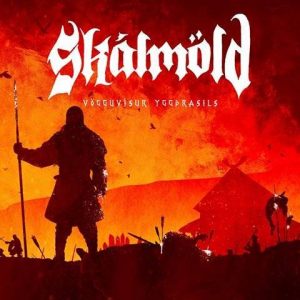 Nidavellir is the first song of this album to be featured in a completely original and not to mention DIY lyric-video on You Tube. It’s a great catchy up-beat metal track, but the great fun the six guys had in writing this song, and creating the video shines through, and is apparent, in every single second of it. That’s what metal is supposed to be right? Fun… ugly, bloody, violent fun. But fun nonetheless. Skálmöld have now, more than ever, caught my attention, as they slowly shift toward a more rocking sort of metal, with a firmer focus on folk. This sonic evolution and infinitesimally small, but obvious nonetheless, change in direction makes their great lyrics about Norse mythology even stronger and forges a better balance between their words and music, although it does mean that their raw edge, part of the band’s DNA since their beginning and something many love about them, has subsided somewhat. That’s one of the things about progression though, not everybody will like, or understand, it. I however ,have become a fully-fledged fan of this Icelandic orchestra. Thoroughly recommended. Martijn Welzen