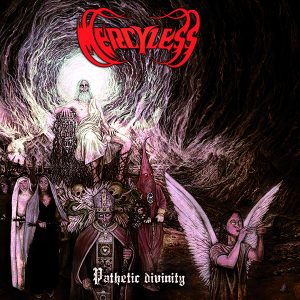 It’s never easy being true to your original sound, without becoming a stale, bleak copy of your former self. I’m sure Mercyless has been struggling with that perception too. Old school death-metal, a nice blend of the Netherlands Asphyx and Sweden’s Unleashed, that still sounds remarkably fresh on Pathetic Divinity. This is all thanks to the power of the production, which is just overwhelming. That has to, partly at least, be due to the modern way of approaching this almost three decade old genre. You can hear the effort which has gone into making this record, which is incidentally the best the band has ever done, while staying as close to their own roots as possible and opening new pathways to hell. The lyrical themes, about the wrongs in Christianity, fit that agenda very well. Martijn Welzen