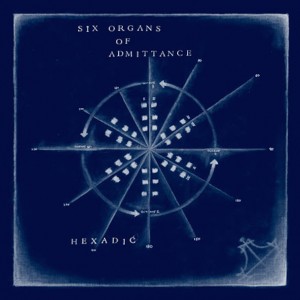 Six Organs of Admittance – Hexadic CD (Drag City)
Experimental is the watchword here. On first listen opening track ‘The Ram’ brought to mind a Film Noir soundtrack filtered through the twisted imaginings of John Zorn before the band reject any notion of standard chord progressions or beats, and meander off the musical beaten track to create something quite twisted and utterly beyond the conventions of description or genre; eschewing even the of unpredictability of Jazz. The press release for this album mentions the word ‘unhinged’ and that really is the best word to describe this. Quite how, or even if, the band were following each other through this manic musical melee is beyond me. It’s intriguing and no doubt this reinterpretation of musical norms will have its fans but I’m afraid it went over my head. Ian Pickens