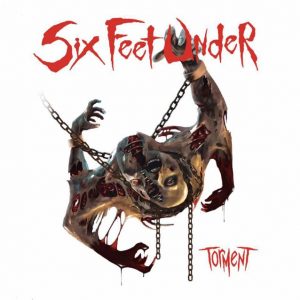 When Chris Barnes started Six Feet Under in 1995 he set out to create music that was different from his previous band, Cannibal Corpse. With SFU’s first album, 1997’s Warpath, he changed the face of death metal by adding a level of groove that was usually absent in DM. Some critics of the band described their sound as rock and roll with a DM vocal. While this appeals to me, it alienated others. Still, SFU garnered a solid following and have gone on to achieve a level of success that was perhaps surprising to some but well deserved in the opinions of others. Note: I have been a fan of Six Feet Under from the very beginning and prefer them to Cannibal Corpse.

With Torment, SFU have crafted an album that will appeal to their die-hard fans as well as those metal purists who may not have approved of the direction Chris Barnes chose to go upon his departure from CC. This new album still has that classic SFU sound but the riffs are more reminiscent of purer death metal, a combination that sets this album apart from its predecessors yet keeps it firmly in place in the band’s discography. Truly, part of what I love about Six Feet Under is that no two albums sound alike and each subsequent release takes the band into new territory, keeping their sound fresh and exciting while remaining familiar. Song titles include Sacrificial Kill, Exploratory Homicide, Bloody Underwear… Okay, that last one makes me chuckle but the others are just the kind of brutal that we have come to know and love. If you’ve been lukewarm to SFU in the past you should follow that convenient link down below and listen to the song. You may be surprised how much you like it. If you’re already a fan of SFU, you know there are no disappointing moments on Torment because you’ve already bought this amazing new album Jim Dodge