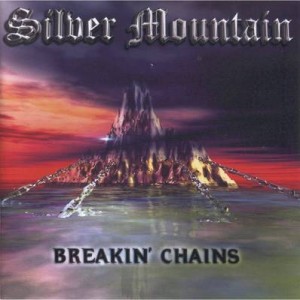 Silver Mountain – Breakin’ Chains CD (HNE Recordings/Cherry Red)
Alongside the expanded 1988 debut ‘Roses & Champagne’ we also get 2001’s acclaimed reunion album… ‘Breakin’ Chains’ is a much heavier modern sounding opus compared to the 80’s rock of the above said record. Some will applaud the change in sound and the more modern take on things these Swede’s show with this reformation release; a more paced, weightier collection of tunes, but still treading waters in the melodic aura of Rainbow reverberation. Plenty of guitar driven melodies, but a noticeably deeper tone. Silver Mountain had cleverly re-worked their sound, this should attract the attention of narrow-minded metalheads whilst still capturing the favour of older fanatics – the re-working of the debut single ‘Man Of No Present Existence’ exhibits the necessary traits. Guitar virtuosos and technical heads will love ‘Breakin’ Chains’ as it fuses a combination of Malmsteen, Stratovarius, and Dragonforce all blended with Rainbow-esque melodies. With the inclusion of five extra live tracks; also taken from the Friluftsteatern show – the same as the debut’s extras, it’s an added bonus that’s a nice idea, but not an essential. Bio, old school photos and lyrics add even more to the accompanying booklet also. Trad-metal or NWOBHM fans will appreciate checking out this album categorically. Mark Freebase