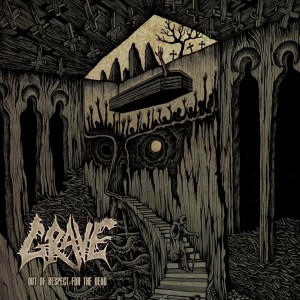 Grave – Out Of Respect For The Dead CD (Century Media)
Does the world really need another Grave record? Fuck yes! Masters of the old school death metal vibe, they never cease to astonish, always coming up with the goods. Brutal, heavy, and gutturally demonic; yet without sounding like an insane wall of noise. Down-tuned guitars hammer through the nine tracks on offer and whether it’s the faster speeds of ‘Mass Grave Mass’ and album title track ‘Out Of Respect For The Dead’ or the slower tones of ‘Plain Pine Box’ the listener is always subjected to some serve splatterings of superiority. Grave haven’t changed their sound much over the years, they haven’t really tried to change anything that they do; instead they seem to sit comfortably creating the music they love and honing all the finer details leading them one step closer to the ultimate death metal record. ‘Out Of Respect For The Dead’ looks great, it sounds great, and it does not disappoint in any way. Mark Freebase