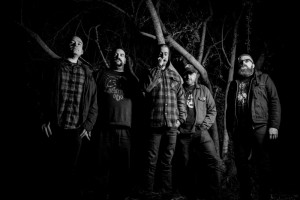 Heavy metal portal Lambgoat has just unveiled a new six-minute-long cut, “Denounce” off of Southern California extreme metal force SEVEN SISTERS OF SLEEP‘s upcoming full-length Ezekiel’s Hags, the longtime webzine calling the band “one of the heaviest out there,” and stating that SEVEN SISTERS OF SLEEP leaves, “a path of sonic annihilation in their wake.”
Stream “Denounce” for yourself now at THIS LOCATION.
Decibel recently premiered a music video for the band’s video for “War Master,” the lead single fromEzekiel’s Hags. The video, which Decibel described as, “total occult insanity, a feast for the dark senses”, can be streamed RIGHT HERE. The single “Gutter” also premiered via Spin last week where the magazine issued, “the album is one of the early year’s most pummeling and cathartic releases,” and can be heard HERE.
SEVEN SISTERS OF SLEEP will also be performing with Coffins and Noothgrush this February at the Ezekiel’s Hags record release show.
SEVEN SISTERS OF SLEEP Record Release Show:
2/16/2016 The Complex – Glendale, CA w/ Coffins, Noothgrush
Ezekiel’s Hags will see worldwide release through Relapse on CD/2xLP/Digital on February 5th, 2016. Digital preorders are available via the band’s Bandcamp page HERE and physical preorders, including limited merch bundles, can be purchased via Relapse Mailorder HERE.
In September it was announced that SEVEN SISTERS OF SLEEP had signed to renowned independent label Relapse Records for their upcoming third full-length album, Ezekiel’s Hags, which is far and away the band’s most ambitious and meticulously-crafted material to date. Delivering a venomous mixture of violent, doom-ridden madness with a severe beckoning to the occult, the quintet has forged a monolithic album that transcends solitary genre classification without rewriting the rules. Recorded with engineer Paul Miner (Motörhead, Terror, Phobia), Ezekiel’s Hags bears fifty minutes of new material through eleven relentless songs that beat the listener into oblivion. Chock full of tortured vocals, gigantic riffs, and thunderous drums, this is music as vile as it can be.
SEVEN SISTERS OF SLEEP is an act not content with fitting into one genre or subgenre. Through titles released by A389, Southern Lord and more since their inception less than seven years ago, and via several notable stateside tours with the likes of Full Of Hell, Ilsa and others, SSOS have hammered their way into the minds of many extreme music thrill-seekers utilizing tactics traced to doom, death metal, black metal, d-beat hardcore, grind and more. The band was formed in mid-2009 by members of Tafkata and The Arm and Sword Of A Bastard God, its members having been playing in bands and live together for fifteen years. Their first self-titled full length LP was released in 2011 on A389 Records and on CD through Southern Lord Recordings, and the band has been refining its sound ever since, as heard on their A389-released 2013 sophomore LP, Opium Morals, the split LP with Children Of God, a self-titled 7″ EP/CD, and their split 7″ EP with Ilsa. A European 10″ EP split with Shaman’s Owl was released on Feast Of Tentacles, and a very limited interlocking groove 7″ EP via longtime friends Vedavu Records rounds out the band’s current discography