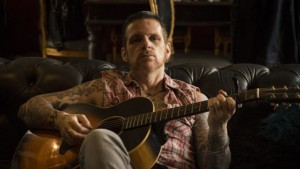 Black Star Riders frontman Ricky Warwick is set to release not one but TWO solo albums next month. The electrifying ‘When Patsy Cline Was Crazy (And Guy Mitchell Sang The Blues)’ and the beautifully acoustic‘Hearts On Trees’ will be released as a double CD on 26th February 2016 via Nuclear Blast Entertainment. Both albums are heavily influenced by Ricky’s upbringing in Belfast, which he discusses in a new album trailer posted online today.

Warwick released the title track from the electric album, ‘When Patsy Cline Was Crazy (And Guy Mitchell Sang The Blues)’ last week:

The artwork for the double albums reflect the tone of each – ‘When Patsy Cline Was Crazy…’ showcases the electric rock and roll side of Ricky, whilst ‘Hearts On Trees’ veers more towards tender stripped-back songwriting, influenced by both Americana and, more importantly, Ricky’s Northern Irish roots.

Ricky explains: “Hearts On Trees and When Patsy Cline Was Crazy (And Guy Mitchell Sang The Blues) were written by myself and my good friend Sam Robinson, both albums depict our experiences of growing up and coming from the Greater East Belfast area, not only experiences that have happened to us but historical references and stories that have been told to us by friends and family…in saying that both albums translate those experiences on to a global scale that hopefully anyone geographically can relate to.”

Ricky will have  a full band on board to bring these great songs to fruition on the stage. Ricky Warwick & The Fighting Hearts will be supporting Belfast’s own favourite sons, Stiff Little Fingers on their UK tour inFeb/March of 2016.