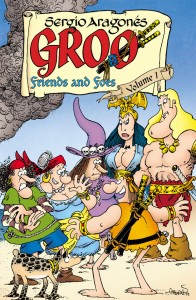 Sergio Aragones’ Groo: Friends and Foes Vol 1 TPB – Sergio Aragones (Dark Horse)
The character of Groo first appeared in 1981 as a back-up story in a comic meant to help raise awareness of comic creator’s rights. Since then, Groo has appeared in many comics for many different publishers before ending up at Dark Horse. And in Friends and Foes Groo, once again we find, is being his usual bumbling destructive self along his traveling companion, Rufferto the mutt, who always unknowingly encourages Groo in his disastrous escapades.

In this adventure, Groo runs into many old friends, or should I say victims, some of their own doing, who try to survive with Groo around. We find Captain Ahax who gets insurance on his newest vessel because Groo is on board hoping that as usual, with Groo around, his ship will sink. Groo next runs into Granny Groo who helped raise the less than brilliant barbarian, and tries to use him in another scheme to raise money, only to have it succeed, much to Granny’s and her Gypsy bands surprise. And as if one walking calamity was not enough, the witches Arba and Dakarba make clones of Groo, using up all their magic while leaving a much bigger problem in return. After more wandering encounters, Groo manages to stir up a “hornets” nest for Arcadio who is trying to train dragons, resulting in the usual calamity and destruction. Throughout all these misadventures, there’s an intriguing and funny sub-plot involving orphan named Kayli whose search for her father means that she always leaves the scene just before it goes bad for the people that run into Groo.

Writer and artist Sergio Aragones has a unique style of art that is cartoon-ish, but at the same beautiful, one that helps move his stories along at an enjoyable pace, though at times can seem like he is filling out pages just for the hell of it and his, and his audiences, entertainment. Mark Evanier and Stan Sakai are both back as well, filling the story, as usual, with words and letters respectively. Groo: Friends and Foes is a fast read that’s always humorous without being crass or gross and it’s a book should find a home with anyone, and everyone, who loves comics. Jason Bonton