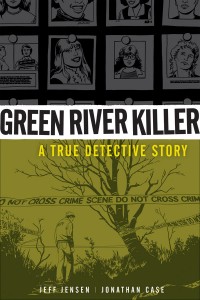 Green River Killer: A True Detective Story (Hardcover Collection) – Jeff Jensen & Jonathan Case (Dark Horse)
In the early 2000’s Tom Jensen spent over 180 days interviewing Gary Ridgeway. For those that don’t know the name, Ridgeway killed more than 40 females during a ten year reign of terror in the Seattle area of the United States and was dubbed the Green River Killer. Tom Jensen, during that whole time, was always working the case even when the official investigation was shut down due to lack of any forward movement. Jensen never let the case close for him and always followed any and all leads. Jensen’s perseverance was awarded when Ridgeway was interned at the office where Ridgeway’s interrogation took place.

Writer Jeff Jensen takes from personal experience and life with his father, Tom Jensen, and tells a story that spans decades. What Jensen manages to do is make the story not about Ridgeway or his crimes, but about the time and mental toil that the people who were involved in the case went through, and the toll it took on those that had to endure months in close quarters with a serial killer. The artwork by Jonathan Case while stark fits the words of Jensen and focuses on the people and their expressions. Whether the story is focusing on family life or the horrors of discovery, Case knows how to maximize the impact of those moments and make them stick and by doing so, ensures that the become more than being just illustrations, which ultimately helps tell the story instead of drawing attention away from it.

For those not into super hero comics, Green River Killer reads more like a horror story as there is a tension that isn’t usually seen (or should I say read) in graphic novel form, one that grabs your attention from the beginning and make sure that you’ll read it on one setting, no matter how long it takes, as you need to know what happens next. Thoroughly recommended! Jason Bonton