Warning: preg_match() expects parameter 2 to be string, object given in /var/www/vip4/sites/vip6102689/httpd/htdocs/wp-includes/formatting.php on line 4866
 The Nasties - Discipline - Mass Movement
x
Spread the love 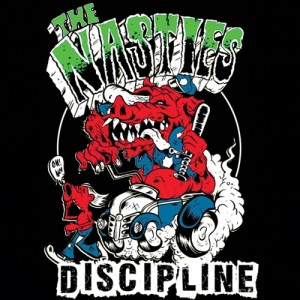 The Nasties – Discipline CD (Sudden Death)
I’m gonna go ahead and judge a book by its cover here. So, we have a record sleeve that is reminiscent of the New Bomb Turks or the Turbo AC’s, a band photo where you can spot merch from the likes of Turbonegro, SNFU, AC/DC and The Clash, and it’s released on D.O.A.’s Sudden Death records. New school it ain’t gonna be! And guess what, that’s 100% correct, as this Guelph Ontario five piece take you on a musical punk rock ride with no surprises but all the thrills of a turbo-fuelled punk rocket. I did have to laugh as I was very briefly reminded of the likes of Uniform Choice on the opening song as they rip through some hardcore-tinged punk rock, but with songs like Negativity, Piece Of Shit and Empty Revenge, these dudes aren’ t exactly disciples of the posi way of life. If you like your punk served up straight and no chaser (although chances are these boys will insist you drink not only a shot but the whole damn bottle) then do yourselves a favour and check this out. Tom Chapman