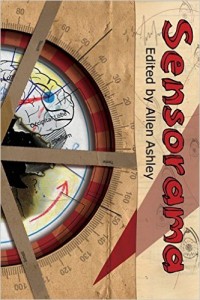 Sensorama – Editor: Allen Ashley (Eibonvale Press)
Collection of 21 short stories in which the senses play centre stage with suitably unsettling, and in some cases, nauseating results.

The stories are a mix of horror, thriller, suspense and Sci Fi so there’s something for everyone; in general the writing is of a very high standard, with some interesting twists on established genres, and a few novel concepts , such as the rather nauseating ‘Stain’ by Ian Hunter in which a father develops a strange taste for the stain he finds on his bathroom ceiling and the extreme measures he takes to introduce his children to the ritual of licking it. Revolting doesn’t begin to cover it. Others such as E. Lilith McDermott’ Going Dark’ offer a philosophical look at bio-robotics in the arena of warfare, whilst Mark Patrick Lynch’s ‘Making See’ questions whether we truly ‘see’ someone with our eyes.

Rhys Hughes gentle‘ The Taste of Turtle Tears’ possesses the charm of an ancient fable or aboriginal folk tale with an underlying theme of the importance of integrity and the questionable nature of exploitation.

The only story which I didn’t really connect with was Ralph Robert Moore’s ‘Bang, Bang Thud’ – possibly because it contained the most visceral language and unsettling imagery in the collection or possibly because of its off-kilter ending. That said even this story had an impact which is surely the purpose of a short story.

So, an enjoyable collection of tales, I’d go as far as saying one of the best collections of short stories I have read in a quite a while. Ian Pickens