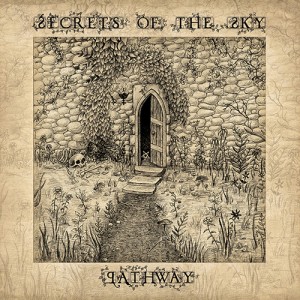 Oakland-based atmospheric doom quintet and recent Metal Blade signees, SECRETS OF THE SKY, will release their long-awaited sophomore full-length this May. Titled “Pathway”, the mammoth thirteen-track follow-up to 2013’s critically-heralded “To Sail Black Waters” full-length was engineered, mixed, mastered and co-produced by Juan Urteaga of Trident Studios with SECRETS OF THE SKY and finds the band at their most poignant.

Sonically, SECRETS OF THE SKY aimed for a massive, clean, and organic sounding production. Much time was invested in obtaining huge drum sounds and the focus was on single performance takes throughout the process. The result is an ambitious foray into conceptual storytelling, coupled with emotional music full of peaks and valleys. This is a metal record, to be sure, but more importantly, it sounds like an album of music. This is not a random sequencing of songs or a search for a “hit” single; the tracks all have their place in the story, and the cuts in between actually drive the narrative through sound effects and ambience. SECRETS OF THE SKY‘s “Pathway” is an experience to be had, as well as a record to merely be heard.

SECRETS OF THE SKY comments on the debut track: “Three Swords was the first song we put together for the new album when we started writing it back a year or so ago. In fact, the songs on the album were written in the order they appear on the record. The first album, To Sail Black Waters, ends with a single guitar part fading out, and the same riff fades in to the Pathway album via Three Swords. The song is just a piece of the overall puzzle that constitutes Pathway, which I believe as an album is more well rounded and dynamic as a whole than any of our previous work.”

SECRETS OF THE SKY formed in the Oakland, California area in 2010 and have spent that past half decade building a reputation as one of the finest underground metal acts. They’ve patiently and deliberately developed a unique sound that melds psychedelic, progressive atmospheres with heavy doom. With their live show, they work to create a mood and offer an experience, a true companion piece to their albums. SECRETS OF THE SKY‘s debut album, “To Sail Black Waters” was released on Kolony Records in 2013 and managed to find its way onto year end lists in Decibel Magazine and across the blogosphere: metalsucks.net, teethofthedivine.com, and more.

Half of 2013 was devoted to touring, and lead to a split with Godhunter. In 2014, two new tracks were recorded and released as part of the cleverly titled split: GH/OST:S. The cassette edition was unleashed during the SECRETS OF THE SKY and Godhunter tour that June, followed by a deluxe LP and digital release in September via The Compound/Battleground Records. To cap off 2014, the band performed as part of Southwest Terror Fest (Neurosis, Sunn O))), Pelican, Goatsnake, etc.), and Salt Lake City’s LuciFest. After the conclusion of their 2014 touring schedule, SECRETS OF THE SKY dedicated their time to writing and recording their sophomore effort, “Pathway”.

SECRETS OF THE SKY‘s “Pathway” will be officially unveiled on May 15th, 2015 via Metal Blade Records. For preorder bundles, scroll on other to: metalblade.com/secretsofthesky.