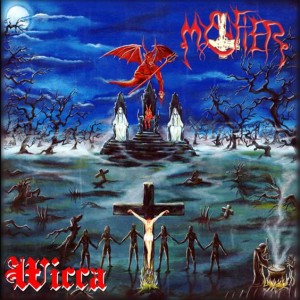 On June 26th 2015 Hammerheart Records will release the first of a set of three deluxe editions by black metal legend Mystifier, their debut “Wicca”, originally released in 1992 on Heavy Metal Maniac Records.

The deluxe digipack CD package contains two discs, with disc 1 containing a fully re-mastered version of “Wicca”, and disc 2 containing the original master from 1992 with their “T.E.A.R. (The Evil Ascension Returns)” 7” EP added as bonus tracks!

The vinyl edition (featuring the re-mastered album) will be available on transparent green vinyl, limited to 100 copies (exclusively in the Hammerheart Records webstore) and a regular black vinyl, with fully restored artwork, 180 gram Audiophile High Quality vinyl and a little surprise added.

In August “Goëtia” will follow and in September “The World Is Good That Who Made It Doesn’t Live Here” with a similar treatment!

A live album (with DVD) and a completely new record are in the works as well! Also a tour is planned for February 2016.

Mystifier was formed in 1989 in Brazil and fits in with Sarcofago, Holocausto, old Sepultura and Holocausto, as a founding stone of the extreme Brazilian scene. These days Mystifier is a cult act, playing their classics and appealing to the dark legions that still worship at the altar of Blasphemy, Sarcofago and Beherit.