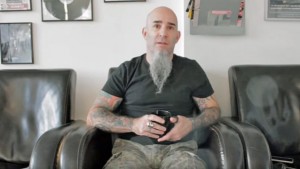 ANTHRAX recently completed a hugely successful UK / EU tour with labelmates Slayer and with bands cancelling tours or wary of hitting the road after the devastating attacks in Paris, we wondered why the guys felt it was so important to see this tour through. Watch as Scott Ian explains all…

The lyric video for ‘Evil Twin’ shows a barrage of places, victims, actions and some of the infamous zealots who have perpetrated violent extremism on innocents around the world, aptly exemplifying the song’s powerful message.

‘Evil Twin’ can be purchased via iTunes, here:  http://nblast.de/AnthraxEvilTwiniTunes.

The band’s forthcoming album ‘For All Kings’ will be in stores on February 26th, 2016. Order here: http://bit.ly/AnthraxShop​