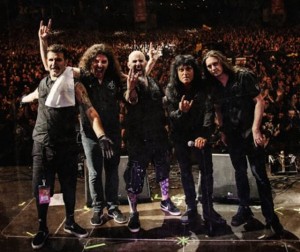 The unique chemistry shared by ANTHRAX’s main songwriters Charlie Benante, Frank Bello and Scott Ian,is, in part, what sets the band’s music apart from other bands’ in the same genre. Drummer Benante comes up with copious amounts of foundation riffs and ideas for the music, bassist Bello writes the songs’ melodies, tailoring them to Joey Belladonna’s soaring vocals and rhythm guitarist Scott Ian has a very particular way of incorporating his intense lyrical ideas into the band’s music. The three together build the songs’ arrangements during writing sessions, and eveyone contributes his own ideas and suggestions to pretty much every song. In the end, the trio brings it all together to create what can only be described as ‘ANTHRAX music’.

In a new trailer released today, all five members discuss the writing process for the new album ‘For All Kings’and how it all came together.

The album will be in stores on February 26th, 2016 and is available to pre-order here:  http://bit.ly/AnthraxShop