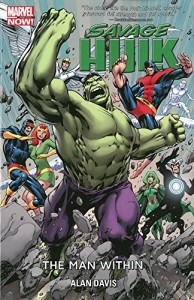 Savage Hulk: The Man Within – Alan Davis, Mark Farmer, Matt Hollingsworth, Roy Thomas & Sal Buscema (Marvel / Panini)
There’s something universally appealing about the Hulk. Something that taps into the rage, frustration and anger that most of us find ourselves falling victim to an almost daily basis, and whereas we have to bottle it up, lock it away and try to forget about it, Hulk is the ultimate avatar of emotional expression. Appearing only when his alter-ego Bruce Banner loses control, feels pain or rage; and I’m almost certain that being human, there’s been at least one occasion when that transformation has made you not only empathise, but also feel solidarity with, Banner and the Hulk. There’s been a time when you’ve wanted to be able to burn through all the frustration and hurt imposed by society and by people being, well, people. There’s been a time, in daydreams and imagination, when every single one of us has wanted to be the Hulk and just wanted to smash. That’s why everyone, even if they don’t love or like the character, has at least a grudging respect for him. Alan Davis knows this, he understands the Hulk’s generic magnetism and in ‘The Man Within’ uses it as base note to add additional layers to, and humanise the monster, in this unusual and intriguing story.

It’s unusual because it’s a sequel that never was to an event that happened in the infamous X-Men #66 (the end of the book’s initial run, or rather the cessation of original stories as from X-Men #67 until #93, the book became a series of reprints and wasn’t properly revived until the mid –seventies), the inclusion of which is a nice touch and a point of reference for the events that take place in ‘The Man Within’. Having used one of Banner’s inventions to revive Professor X, the X-Men are dispatched on the orders of their healed mentor to bring Bruce Banner to him; X feels that he owes Banner his life, but also that he can use the same device –with him acting as a telepathic power source – to finally end Banner’s suffering and give him what he so desperately wants, an end to the Hulk. Knowing the Professor as he does, and willing to try anything, Banner agrees (after a brief mutant versus gamma powered giant showdown in Vegas in which Abomination also becomes involved). Everything seems to be going well until the Leader and Hulk decide otherwise and all hell breaks loose in a battle that rages inside Banner’s subconscious and the real world. It’s a battle that’s set to decide the fate of man and beast, and as there’s no sign of the book ending anytime soon or the Hulk disappearing over the horizon, you can probably guess the outcome.

‘The Man Within’ is powerful and at times touching book that emphasises, and focuses on, the struggle between man and monster, although there are moments in it when it’s difficult to distinguish the two or know which role belongs to the Hulk and which is Banners. Alan Davis’ sumptuous, retro art gives the tale a real period feel and his examination, throughout the tale, of the duality that exists, and the conflict that rages, in all of us ensures that ‘The Man Within’ is a book that once you’ve picked it up, you won’t be able to put down until the dust has settled and you’ve reached the final frame. Intelligent, fantastic, gamma-powered fun… Tim Mass Movement