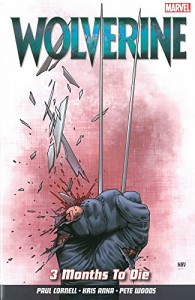 Wolverine: 3 Months to Die – Paul Cornell, Kris Anka & Pete Woods (Marvel / Panini)
Unless you’ve spent the last six months on secondment to the super-secret CIA outpost on the Moon, hiding out in your volcano lair or trekking through the Amazon on an ill-fated and incredibly foolish expedition to discover the source of its eponymous river, then you’ll know that Wolverine, like all of the most popular figures in the Marvel Universe must eventually do, has shuffled off his mortal coil and gone to meet his, ours and the Universe’s maker. That’s right kids, old Logan is dead, and the title of this book isn’t some vague illusory reference to what might be, it’s a countdown to the cold hard reality of the grave, serving as yet another step on the pathway to non- existence. Wolverine is dead, and ‘3 Months to Die’ is the story of how Logan learns to accept and embrace his mortality, conquer his fear of death and starts to live in the short , unbeknownst to him of course, time he has left.

Having faced his fear, with a little help from Shang-Chi and Danny Rand, and mended the bridges he burned with the X-Men and a certain Avenger, Logan moves on to the unfinished business he has with ex-lover and former team mate Pinch (who just happens to possess a sentient, super-weapon capable of altering all of reality), which once again brings him back into the crosshairs of Sabretooth. Who just happens to be holding Pinch and her daughter, among others, hostage, because.. .Well, because he’s Sabretooth and the only thing he wants more than Wolverine’s head on a silver platter, is a weapon capable of controlling matter and transforming the world according to his will. Which is exactly what the weapon Pinch is holding will do in the wrong hands, and hands don’t come much wronger than Sabretooth’s. So, all Wolverine has to do, with a little help from his friends, is save his ex and her daughter, defeat Mystique (who’s also along for the ride) and the Hand and prevent Sabretooth recreating existence according to his own twisted design. Simple, huh? It would be if Wolverine still had his healing factor and was immortal, but as he doesn’t have them anymore, he’s going to have to do it the only way he knows how. The hard way.

There’s a sense of inevitability to ‘3 Months to Die’, and running underneath the first rate action and gorgeously illustrated brutal, bone snapping, claw filled mayhem and strangely sentimental, and, oddly, heart-warming plot, it’s a story of a man putting his affairs in order and preparing, whether he knows it or not, for the end. And while this undercurrent may not be glaringly obvious throughout the main feature, in the included bonus chapter, Wolverine Annual #1 (2014), he teaches Jubilee how to survive in the wild, that inevitability become obvious in a poignant cycle of nature encounter, in which death becomes the plaything of circumstance and fate. Death is coming, but until it arrives, dig in, dig deep and enjoy ‘3 Months to Die’, because believe me, in these pages, there’s a heck of a lot to love. Oh, and for the record? He’s still the best at what he does… Tim Mass Movement