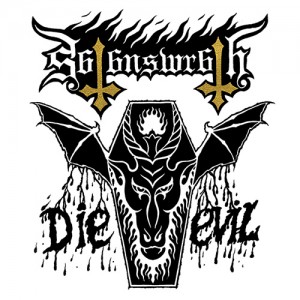 Satan’s Wrath – Die Evil (Metal Blade)
The Greek purveyors of metal release their third opus of Celtic Frost, (early) Slayer, Possessed and Venom inspired blackened death metal thrash. Lashings of speed, pure evil vocals and crazy drum blasts all ensure Satan’s Wrath re-create an honest era of metal that seems to have been forgotten (but missed by so many). As with their previous two albums the band has managed to hang on to the old school feel, yet without saturating it’s presence or creating an unwanted feel of stagnation. The unholy nightmare, which unfolds throughout the nine songs present on ‘Die Evil’, gives little leeway from the path of pure evil as the carefully fashioned song titles imply maximum malevolence and blasphemy backing up the filthy execution of each tune. Artwork and image confirm Satan’s Wrath have no intentions other than hammering home some brutal metal – this is how it should be played! Mark Freebase

Satan’s Wrath – Die Evil (Metal Blade)
When you’re standing in front of the mirror and shout, at the top of your lungs; ‘crushing post- apocalyptic, nuclear black­metal­proto­thrash’, three times, it is said that an axe is likely to appear and chop your head off. Satan’s Wrath has made one scary record to give even the most hardened metal head nightmares. Slayer and Venom stirred this blasphemous toxic soup up in the early 80s, and bands like Toxic Holocaust added lethal spices 20 years later, but for Satan’s Wrath even that wasn’t evil enough. Nails, bullets, goat intestines, alcohol and a few corpses have taken ‘Die Evil’ to the next level. Want music to give you a hairy chest instead of a hipster beard? Get Satan’s Wrath! Martijn Welzen