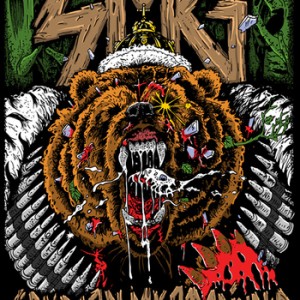 Siberian Meat Grinder – S/T LP/ CD (Dirty Six/ Destiny)
Siberian Meat Grinder are a hardcore-thrash-crossover outfit, that deliver that explosive combination faultlessly, and this album compiles their two hard-to-find EPs together with a song recorded with Moscow ska-punk legends Distemper. This a neck-breaking headbanging fiesta from start to finish! Tooth chipping riffs and lightning speed drums provide the ammunition and the killer shot is then delivered by the twin vocal attack. As with all the classic thrash crossover bands, musically this doesn’t focus on the evil side of the riff – more street than satan on here – with some of the choruses almost having a hip-hop touch to them and that helps keep things rooted firmly in the hardcore camp. That said, you can hear how SMG enjoy in bringing different aspects of hardcore and metal together, throwing in some Sabbath style riffing here and there before returning to top gear. Some of the Russian bands tend to focus on the more political lyrics – see the likes of Moscow Death Brigade, Purgen or What We Feel, but with song titles like “Chainsaw In The Dark” or “Slay The Dragon”, SMG have a different approach and embrace their own subculture of graffiti, tattoos, facemasks, the Moscow bear and above all having a good time, and this translates perfectly onto this hardcore party record. A great record and anyone that can’t get enough of Municipal Waste, SSS, Iron Reagan and the rest should make it a priority to grab this one whilst it’s hot! Tom Chapman

Siberian Meat Grinder – Siberian Meat Grinder (Dirty Six / Destiny)
Would you like to know what it’s like sharing a cross over mosh pit with a Russian bear? Here’s one record to answer that question. It’s going to be a bloody, sweaty and violent party like no other. The first two EP’s of Siberian Meat Grinder have been combined for this invasion of Eastern European thrash. Both ‘Hail The Tsar’ (2012) and ‘Versus The World’ (2013) are what we like best, a speeding metal train, about to derail, but just clinging on to sanity with it’s final grasp. This band demonstrates all that Moscow has to offer on underground culture, such as music, skateboarding and graffiti. Which also shows kindred spirits are to be found anywhere. SMG should easily appeal to all fans of Municipal Waste, SSS or Dr. Living Dead. Martijn Welzen