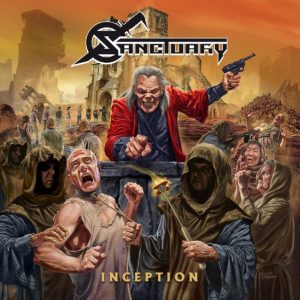 I’ve loved Sanctuary ever since seeing them open for Megadeth in Birmingham back in the late Eighties. They were superb, and as was Megadeth’s wont around then they had a terrible sound and had their arses handed them by the support band. Anyway, it was great to see Sanctuary return with The Year the Sun Died in 2014, and thankfully that album has paved the way for this, as Zeuss who produced that has assisted the band repairing and restoring this 1986 demo that actually pre-dates their first album, 1988’s Refuge Denied.

Most of the songs on here actually ended up on that debut LP, but they sound so much better on this demo, partly because of the youthful energy they were delivered with, and partly because of the sterling job Zeuss has done on remixing and remastering them. It’s genuinely hard to believe these recordings were made over thirty years ago, they sound so good. And when you consider these songs were written by a band in their infancy, it’s staggering the talent on offer, and little wonder they were taken under Dave Mustaine’s wing and snapped up by Epic Records.

There are two songs that didn’t make the debut LP included, opener Dream of the Incubus and I Am Insane, and yes, the lyrics are utter cheese, but these are killer songs that are great to own now they’ve been spruced up (they were previously only available on the internet and quality was usually questionable).

The whole package has been gestating for a long while, and it really shows that it’s a labour of pure love, as the evil preacher who adorned the front cover of Refuge Denied has been brilliantly resurrected by the one and only Ed Repka, and the CD comes complete with a hefty retrospective booklet literally heaving with liner notes, photos, concept sketches… and mullets. Lots of mullets. Pure manna from the heavy metal gods.  Ian Glasper