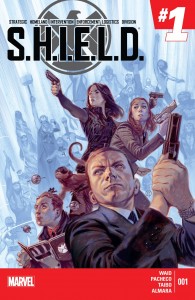 S.H.I.E.L.D. : Perfect Bullets – Mark Waid, Carlos Pacheco, Humberto Ramos, Alan Davis, Chris Sprouse, Mike Choi & Paul Renaud (Marvel / Panini)
Finally, after hitting the big screen in more than a few action-packed, edge of your seat, end of the world type blockbusters and headlining his own television series, Phil Coulson gets his own comic. Along with May, Fitz and Simmons (no Skye or Ward though, which I suspect is due to the whole Inhuman and HYDRA thing), Phil has become the mainstream face of S.H.I.E.L.D. so it only makes sense that you incorporate him more fully into the four colour universe. And in order to do so effectively, you put your big guns in charge of outlining his, and his team’s, destiny – which is probably why Mark Waid got the job; and he pulls out all the stops, as do the team of artists working side-by-side with him, in ‘Perfect Bullets’, which if I’m honest, I enjoyed a lot more than I thought I was going to. See, before I started reading the book I was worried that it would just be a tie in for the show, something to help boost the small screen adventures of the team, and much as I like the show, I’ve always thought that Marvel were better than that. And I was right. They are, as ‘S.H.I.E.L.D.’ the book, apart from the characters sharing a lot of the personality traits as their onscreen counterparts (Coulson has the same dry, deadpan sense of humour, Fitz and Simmons are tech and science obsessives and May still likes to hit first and ask questions later), the book is a vastly different property to the show, and if anything, is even more enjoyable.

Designed almost a series of one shots, with a different artist working on each of the six parts collected in this trade, ‘Perfect Bullets’ has overall plot arc that links each part to a greater whole in which Coulson and his team, alongside Spider-Man, Black Knight, Valkyrie, Ms. Marvel, Sue Storm, The Scarlet Witch and just about every other hero on Earth find themselves fighting the forces of dark magic as their “leader” attempts to subjugate the planet. From the deserts of the Middle East, to the depths of the earth, Stephen Strange’s mansion in New York and far beyond, Coulson and his agents (with a “little” help from the super-hero community) valiantly battle the oncoming storm in what they initially believe to be a series of unconnected incidents. It isn’t until someone starts trying to kill mystics that they finally manage to put two and two together; but by that point it’s almost too late as a magic based virus that preys on intellect, infecting the most gifted first and then moving down the “ladder”, is unleashed to prepare the way for the masters coming, prompting Coulson and company to take the fight to their enemy. It’s properly exciting, gripping storytelling full of swerves, tricks and turns that does a great job of keeping you guessing right up until the final chapter when all hell, well and truly, breaks loose.

Mark Waid was, and is, the perfect man for the job and combines first rate characterisation with bright, snappy dialogue and an imaginative, smart plot that’s given a unique identity and feel, thanks to the vastly divergent, yet always visually pleasing and stimulating, styles of the artists involved. If you like the show, then you’re going to LOVE this book. It really is that simple… Tim Mass Movement