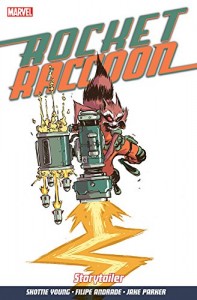 Rocket Raccoon: Storytailer – Skottie Young, Filipe Andrade & Jake Parker (Marvel / Panini)
If you’d told teenage me that one day adult me would be doubled over with laughter while reading a comic about a psychotic raccoon and a walking, talking tree he’d probably have mumbled something about ‘going soft’ and selling out before promising to get Lucifer to fix his adult self’s wagon good and proper for turning his back on darkness, doom and despair. But for the most part, teenage me was an idiot, and I’m glad that I’ve mellowed enough (not a lot, just enough) to be able to thoroughly enjoy the, frankly insane, adventures of Rocket Raccoon, because folks, there’s one heck of a lot to enjoy in ‘Storytailer’.

The pace of the stories on offer is, as ever, lightning fast and by lightning fast I mean blink-and-you’ll-miss-something-quick and doesn’t take its foot off the accelerator or even ease up until the final panel of the final page. Beginning with Rocket having to battle the biggest monster you ever did see I order to find an antidote for his fallen comrade Groot (don’t ask, it’s a long story that’s going to be much more enjoyable if you read it yourself. And remember, I don’t do spoilers), the friends are then catapulted straight into a future scenario in which they strive to find a way to defeat Kaiju Groot and prevent him from destroying humanity, before Rocket is finally given the chance to find out about his past when the whereabouts of the book of Half-World are discovered and he sets out to retrieve it. Needless to say, it doesn’t end well for our hero and his best pal, but folks if the penultimate panel did end with sunshine, rainbows, prancing unicorns and everyone smiling, the last frame would be Rocket letting loose with the mother of all guns, screaming ‘Blam, murdered you!” Because, you know, this book isn’t about pretty flowers and skipping off into the sunset, it’s about death, destruction and wanton violence and somehow, in the midst of all that carnage, doing the right thing. And I wouldn’t have it any other way.

Skottie Young has crammed every single one of Andrade and Parker’s eye popping, jaw dropping art filled pages with humour, plot and characterisation galore, guaranteeing that you’ll consume the book in a caffeine fuelled single sitting and as soon as you do, you’ll go straight back to the start and do it all over again. It’s frantic, it’s fast and its fun and that is about as much as you could ever ask from any book and I suspect that if he’d had a chance to read it, even teenage me would have loved ‘Storytailer’. Let the mayhem begin… Tim Mass Movement