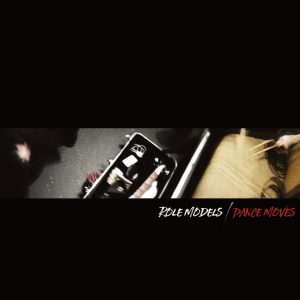 They’ve only gone and bloody done it! For the uninitiated, Dance Moves is the Role Models’ third album in as many years. That was head honcho Rich Rags’ vision and it’s been fulfilled with aplomb. This longterm goal is no mean feat given the modern world’s short attention span for instant clicks and disposable internet ‘likes.’

Like The Go-To Guy and Forest Lawn before it, we don’t go too far off the Role Models’ tried and tested beaten rock ‘n’ track as Dance Moves roils in Tom Petty style licks and passionate vocal call-to-arm anthems with an underlying punk edge. I’ve heard fans who pledged online say that this is a more mature long player than its predecessors. There are certainly more than a few darker twists and turns, and in terms of the lyrics that may be true. All that said Dance Moves still fills you with the reckless abandonment of youth. Rich Rags has this uncanny knack of creating songs that demand you open the windows of your beat-up Ford Cortina on a hot summer’s day and fly a middle finger at the world.

In traditional Role Models fashion we get fist-pumpers galore. The cream of the crop being Manette Street, which is reminiscent of the more uptempo cuts from The Hold Steady’s “Boys and Girls in America” album. Cue organ swirls in the background and a hook that gets trapped in your head and doesn’t escape. But why would you want it to escape when rock ‘n’ roll can be this good?

There’s also time for a piano led ballad in the shape of Obituary Writer. Don’t panic, rock fans! We ain’t taking 1980s power ballad cheese. What you get is a track that wouldn’t go amiss on a Jesse Malin album as it provokes images of kicking-out time in a New York City dive bar.

Wizard Van (among others) sees Rich Jones back in the fray with some glam punk riffage. Yes, that Rich Jones of the Michael Monroe band, Amen, The Black Halos, Ginger Wildheart, et al. Jones is something of an unofficial 5th member as his friendship with Rags extends way beyond their time together in The Loyalties. Dance Moves also features Duncan Reid (The Boys) and previous album guest spots have included the likes of Sami Yaffa (Hanoi Rocks / New York Dolls). This is testament to the strength of Rich Rags’ songwriting and the respect he’s so rightly gained. We mustn’t lose sight of the Role Models’ current mainstay collective though. Nick Hughes (guitar), Daniel Husayn (bass) and Simon Maxwell (drums) are integral to the Role Models sound. After cutting their chops with the likes of The Yo-Yo’s, Thee Spivs and The Loyalties I guess you’d expect nothing less.

Listen after listen you get lost and found in the passion of Dance Moves. It’ll take you up and down, through many a twisted path but ultimately leaves you coming out the other side with a wry smile for rock ‘n’ roll salvation. Rags yells “let’s go to Soho.” I’m there, Rags. I’m there. Ginge Knievil.