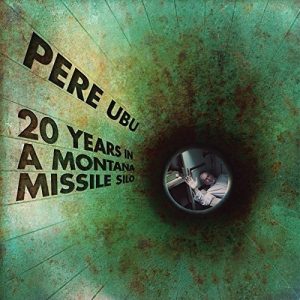 I’m a huge fan of The Modern Dance, Pere Ubu’s debut record and still play it at least once a week. And while I’m pretty much clueless about what the band have been up to in the thirty nine years between that record and 20 Years in a Missile Silo, after spending an afternoon or two with this eccentric and eclectic album, I’m forced to maybe admit that they’ve stayed true to their unique vision and individual way of doing things. 20 Years isn’t easy to listen to and isn’t exactly immediate as it weaves and wobbles its way through its( B-52’s meets The Cramps with a touch of Bauhaus) slightly avant garde and weirdly compulsive songs, but stick with it and don’t give up and sooner or later, you’ll find yourself experiencing one of those clichéd “light bulb” moments when everything just clicks into place  and it all makes perfect sense. And when that happens, and it will, 20 Years in a Montana Missile Silo is all you’ll want to listen to. Over and over and over again.  Let the bombs fly… Tim Cundle