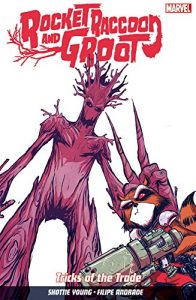 Much as I, and I’m guessing most of you, dig the Guardians of the Galaxy and their self-appointed leader and immutable rogue Peter Quill and the diametrically opposed warrior duo of Drax and Gamora (and yes, I know Venom, The Thing and Kitty Pryde are also part of the team, but I wanted to keep things simple, relatively, straight forward), the undisputed stars of the squad are the perennial odd couple, Rocket and Groot. Look, none of us will probably admit, in company at least, that a walking tree capable of making a single sentence mean all things and a cybernetically and genetically altered raccoon with an aggression problem and a personality disorder are the real reasons that we’re all  fanboys and fangirls of the Guardians, but deep down inside we all know that it’s true.  So, because this isn’t a group therapy meeting, I’m not going to ask you to all stand up, one by one and finally admit what we all know, I’m just going to take it as read, and maybe a little for granted, that as far as everybody is concerned, Rocket and Groot are the light, the way, the main men and the big Kahunas. Because it is true and that’s that.

Skottie Young and his awesome trio of artists(Andrade, Fosgitt and Conley) know this; and content in that knowledge, tell a quartet of stories that play to their characters strengths and highlight everything that we (you, me and everybody else out there in comic book, cartoon and movie land) know and love about the pair of cosmic delinquents. There’s the tale of how Groot tracked his friend from one universe to the next with only a map etched on his body to guide him; a quest that saw him become entangled in more adventures that most can dream about in a hundred lifetimes, only to come face to face with a despot and dictator. It flips the readers’ expectations upside down and then pokes its tongue (and presumably, if that’s your thing, other body parts as well) out at the audience in defiance before returning to comfort and safety of the business as usual status quo. Then there’s the story of Rocket and Iron Man’s games night challenge to discover, once and for all, which is best:  fantasy football or D20 powered sword and sorcery role playing games and the revolution that Groot and his best buddy become unwittingly involved in that involves an interrupted vacation, a mysterious box won in card game, imitating a deity, a rather large bomb and lots and lots of uber violence.  Or my personal favourite, in which Groot and Rocket’s constant game of one-upmanship comes to a head in the final conflict of a thousand year old war. There’s something for everyone in Tricks of the Trade, which is full to bursting and beyond with wise cracking dialogue, funny and involving plots and drop dead gorgeous artwork. And there’s a whole lot of Rocket and a whole lot of Groot doing what they best. Killing everyone and having fun. Who could ask for anything more?  Tim Cundle