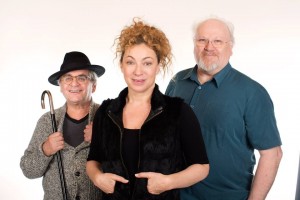 Time travelling archaeologist and adventurer River Song will return on audio in 2017 –
and this time she will be stepping into the past life of the Doctor, encountering two of his
incarnations at once! Alex Kingston returns in The Diary of River Song: Volume 2 from Big
Finish Productions, a Doctor Who spin-off that is licensed by BBC Worldwide.

From the space exploration vessel Saturnius – which is heading to a destination that never
gets any closer – to a doomed planet Earth and beyond, River’s journey will bring her
closer to a new foe… and an encounter with both the Sixth and Seventh Doctors.

The four hour-long adventures are The Unknown by Guy Adams, Five Twenty Nine by
John Dorney, World Enough and Time by James Goss and Eye of the Storm by Matt
Fitton. The impressive guest cast includes Anna Maxwell Martin (Midwinter of the Spirit,
And Then There Were None, The Bletchley Circle), Jessie Buckley (War and Peace), Ann
Bell (Tenko, Wallander), Robert Pugh (Game of Thrones, Mr Selfridge, Doctor Foster),
Dan Starkey (Doctor Who, Wizards vs Aliens) and Barnaby Edwards (Doctor Who).

2017 will also see the release of a second volume of Doctor Who – The Churchill Years,
in which Ian McNeice returns in the role of Winston Churchill – once again relating more
terrifying adventures that featured his old friend the Doctor.

Also returning for a second volume is Doctor Who: Classic Doctors, New Monsters, in
which legacy Doctors battle foes from the post-2005 series. Expect a return for some of
the Doctor’s darkest and most terrifying enemies…

The series are produced by David Richardson, script edited by Matt Fitton, directed by
Ken Bentley and Barnaby Edwards and the executive producers are Jason Haigh-Ellery
and Nicholas Briggs

The Diary of River Song: Volume 2, The Churchill Years: Volume 2 and Doctor Who:
Classic Doctors, New Monsters: Volume 2 can all be pre-ordered individually or as part of
a bundle at www.bigfinish.com. Alex Kingston also returns as River Song in Doctor Who:
Doom Coalition 2 alongside Paul McGann, Nicola Walker and Hattie Morahan, which is
released in March 2016.

The first volumes of The Diary of River Song and The Churchill Years are currently
available. Doctor Who: Classic Doctors, New Monsters: Volume 1 is released in July.