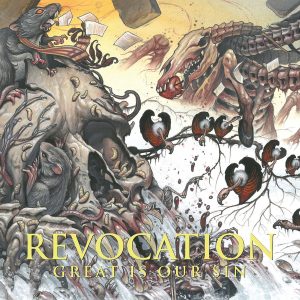 Revocation isn’t a band whom I’ve heard much from before now. I’ve listened to a song here and there but never a full album. Now I realize that this has been an egregious mistake on my part because this band is awesome! What a fool I’ve been for letting them slip through my metaphorical fingers! Now I’ve fixed that and I can learn to live better in the future. Great is Our Sin is a wonderfully heavy album that excited me from the first track to the last. I went in expecting to get ground into dust by monotonous heavy metal of the sort that I’ve heard a thousand times before but, instead, Revocation has composed an album full of dynamic songs in which you can hear their influences being turned into influence all of their own. Like any good album, this isn’t just a collection of new songs from an established band. It’s a transcendent, magical experience of the sort that only a truly great band can deliver to its fans. Jim Dodge