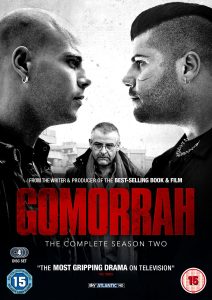 The ever popular process of producing television shows from books can be a bit hit and miss. But right next to Game of Thrones in the successful stakes is Gomorrah-now on its second season.  Comparisons with The Wire, would give any newcomers to the show an indication of what to expect, perhaps with a bit of Sopranos thrown in for good measure, but Gomorrah is far more gritty than either of those shows and shows a side to Mafia life that we don’t often see in movies. It’s not all sharp suits, nice cars and big houses. These are gangsters that are based in the underworld of Naples and aren’t afraid to get their hands dirty.  Like any good T.V show Gomorrah has that ability to take your emotions on a rollercoaster ride and make you switch allegiances (Ciro or Genny) more times than a Labour backbencher. As Season 1 drew to a close, it was almost too much to bear. For instance when Danielino, having found out his girlfriend had been murdered, chose to suck on a gun, and of course, the now obligatory “cliffhanger ending.” Based on journalist Roberto Saviano’s 2006 non-fiction book of the same title which blew the lid on the Neapolitan drugs underworld, the stakes for the second season were even higher.

Season 2 kicks in directly after the events of  Season 1 where we find Ciro”The Immortal” Di Marzio (Marco D’Amore) stepping up his campaign for dominance of the coke trade in Naples and Don Pietro Savastano (Fortunato Cerlino),now fresh out of the slammer, and eager to reclaim his turf.  Like that old second album syndrome that so many bands have suffered, there were fears that the first season couldn’t be topped, or even equaled. Rest assured Season 2 is their equivalent of Led Zeppelin II or Ride the Lightning if you prefer.  It’s a classic. Although a lot of the book was played out in Season 1, it’s clear that they still have plenty more material to draw from. All the things we loved about the first season are present and correct-Naples still provides the dirty, bleak, urban backdrop, to the whole thing, those shaky cam, almost documentary like scenes and the characters themselves are still as engaging as ever and I think the fact that most of the cast are mostly unknowns to U.K audiences, helps us buy into the realism of the situations and keeps us rooting for them. It’s also unnerving for the watcher to know that in true Game of Thrones style-nobody is safe

I’ve tried to keep this review as spoiler free as possible because if you are reading this then you, must have a mild interest in it, so you really should go and check out Gomorrah for yourselves and by all accounts Season 3 (or Led Zeppelin III/Master of Puppets) has been green lit, so we have a few more years to enjoy, what is one of the best shows on television at the moment.… Chris Andrews