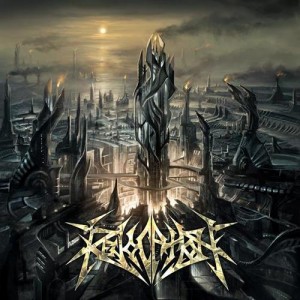 Revocation – Empire Of The Obscene (Metal Blade)
I am actually a simple man, who likes simple, fast music. As much as I love Revocation and definitely acknowledge their talents and progression, I am not the one to put on ‘Deathless’ (2014) easily. There’s so much going on, my senses just can’t cope. The band does come from a simpler background however. In 2008 they released their debut ‘Empire Of The Obscene’, which was only printed in a limited run and never saw a second pressing. Until now! Metal Blade has decided to give this early work of one of the most talented new metal bands another shot in the spotlight. It’s a lot more straight up metal, mixing Slayer with Annihilator, and touches of New Wave Of American Heavy Metal with David Davidson’s highly original and recognisable twists. Whereas Revocation these days forces you to listen and wonder, back in the day they also made you bang your head a lot more. We can all rejoice in the fact ‘Empire Of The Obscene’ is given a second life as this album is one of the best debut albums money can buy. Martijn Welzen