Warning: preg_match() expects parameter 2 to be string, object given in /var/www/vip4/sites/vip6102689/httpd/htdocs/wp-includes/formatting.php on line 4866
 RETURN to SIN CITY with THE HARD GOODBYE CURATOR’S COLLECTION - Mass Movement
x
Spread the love 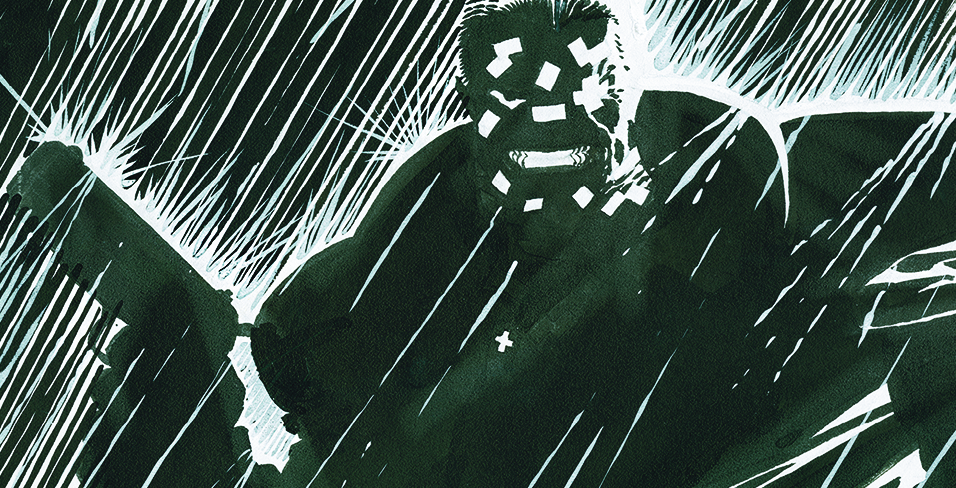 25 years after its first publication in the pages of Dark Horse Presents—get ready to experience one of the most groundbreaking graphic novels of all time as few have ever experienced it!

Produced and assembled under the Kitchen Sink Books imprint, Frank Miller’s Sin City: The Hard Goodbye Curator’s Collection will be published by Dark Horse Comics in 2016, showcasing the entire graphic novel scanned from the original artwork in Frank Miller’s personal archives and reproduced unaltered and at full size.
“The Hard Goodbye was my first crack at writing and drawing a comic book with total freedom,” said Frank Miller. “I am grateful to Mike Richardson and Dark Horse for helping make it such a big success. You can now see my work warts and all. You can see just how many mistakes I actually made!”
“We’re very excited to release this new ‘Curator’s Collection’ for The Hard Goodbye that brings a unique insight into one of the comic industry’s historic treasures,” said Dark Horse President and Publisher Mike Richardson. “Frank Miller has proved time and again that he’s a titan when it comes to artistic talent, and this deluxe, oversized edition is a celebration of his most influential work.”
“Almost 25 years later it has become clearer just how truly groundbreaking Frank Miller’s work on Sin City was . . . aside from the drastic evolution of his artistic style toward stark and energetic black and white, Frank’s spearheading the belief that creators should actually own their creations and Mike Richardson’s willingness as a publisher to support that initiative helped shift the industry toward creator-owned work being the standard it is today,” said collection editor and designer John Lind. “The ability to show this original work in raw form and put it into context for a future generation is something we’re conscious of going in.”
“Frank has been a good friend for many years and was always one of the most ardent and vocal supporters of the CBLDF during my tenure as president.” said Kitchen Sink Books co-founder Denis Kitchen. “At my former publishing company, Frank and I never found the right big project to work on together, so it was fortuitous that decades later, through our Kitchen Sink imprint at Dark Horse, we have the chance to finally team up and produce this deluxe edition.”

Curator’s Collection is the Kitchen Sink Books term for oversized, archival deluxe collections accompanied by essays, interviews, and unpublished work. Frank Miller’s Sin City: The Hard Goodbye Curator’s Collection is the first volume in the planned Curator’s Collection series from the Kitchen Sink Books imprint at Dark Horse Comics.
Retailing for $175, Frank Miller’s Sin City: The Hard Goodbye Curator’s Collection will be an impressive book to own—a deluxe hardcover with a HUGE trim size of 15 x 21.5 inches, 224 pages, and smyth sewn binding under a cloth spine. Featuring an introduction from Sin City co-director Robert Rodriguez, an epilogue by publisher Mike Richardson, and a new interview with Frank Miller about his artistic technique to accompany the interior artwork—this edition is not to be missed! Ships worldwide in June 2016.

Frank Miller will be signing an exclusive print of his original cover artwork for Sin City at New York Comic Con on Saturday, October 10, 2015 from 4:00 PM to 4:45 PM at the Dark Horse booth (#1636). This is a wristband-only event. (Wristbands distributed from the Dark Horse Comics booth by drawing at show opening on Friday and Saturday. Signing limited to a free poster that will be provided and one other comic, book, or piece of memorabilia. Some restrictions may apply.)