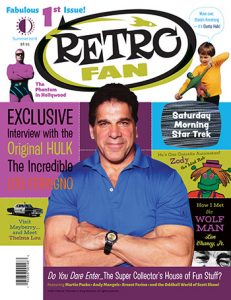 Let’s get one thing clear right from the off. I love this magazine. It’s one of those periodicals that feels like it could have been published just for me, almost as if someone singled me out, lifted the top of my skull off, then took a peek inside my mind and said “You know what, we should make a magazine just for this guy”.  Built around  a relatively simple premise, that it’ll cover the, what’s recently become known as, geek culture of yesteryear and the things that us slightly older and more mature fanboys and girls grew up adoring, Retrofan is anything but simple and straightforward. Beautifully designed, incredibly well –written and researched, it’s staff of contributors have a depth of knowledge about, and a passion for, their chosen subjects that’s both laudable and mind-boggling.

This debut issue features fascinating and magnificently in depth features that cover the history of The Phantom on the big and small screens and the story behind the creation, and lifespan, of the brief, but immensely popular, animated Star Trek series from the seventies – both of which are worth the cover price alone. There’s also in depth interviews with Lou Ferrigno (The Incredible Hulk) and Betty Lynn (Thelma Lou from the Andy Griffith Show), more features about a certain green monster produced by Mego Toys, a strangely appealing gadget from days gone by, the counter-culture comic that was intended to appeal to “squares”, the personal journey of a famous Monster Kid that was in no small part influenced by a not-so accidental encounter with Lon Chaney Jnr and the story of a show and the town that celebrates it that had me mentally planning a vacation to Mount Airy before I was even halfway through it.

As first issues go, Retrofan is slick, polished and wonderfully executed and its opening salvo hits its target audiences bullseye over and over again. It’s not often that I’m excited by the prospect of reading, or even get the time to read, a magazine these days, but I sat down and made the time for Retrofan and boy, oh boy, am I glad I did, as this periodical doesn’t put a foot wrong from beginning to end.  And if you’re still reading this, then I’m pretty sure that you’ll love Retrofan as much as I did, and do. Get your geek on…  Tim Cundle

Order your copy of Retrofan here