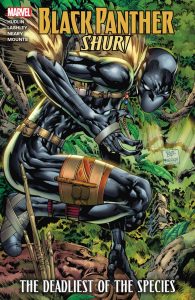 With a smash hit movie backing him up and a sequel in the works, Black Panther has very much jumped to the A-list table at Marvel HQ. So keen to follow that up Marvel have collected Black Panther numbers 1-6 in this enthralling book which takes us back to Wakanda as the country faces a threat, the likes of which they’ve never seen before. It’s hard to say how much time has lapsed between the events in the movie and this book, but there are several significant elements which have been added to the book, to bring the Black Panther further into the Marvel world.

A seemingly innocent diplomatic mission sees T’Challa fighting for his life. Now with the Black Panther comatose, Wakanda finds itself vulnerable to attack from the returning Morlun along with several other notable bad guys from the Marvel Universe. With her kingdom wondering about the whereabouts of the Panther, the Queen has to make a decision. Try and defend Wakanda without its most famous warrior or appoint another. Step forward Shuri, next in line to the title of Black Panther-but is she worthy? Shuri, desperate to step out of the shadow of her brother and prove her worth, undertakes the dangerous ritual to consult the Panther King, while the Queen herself, goes to deaths edge itself, to try and retrieve Wakanda’s fallen hero.

Its nail biting stuff, as several strong female characters, take centre stage and are given difficult decisions to make- decisions which could change the whole landscape for future Black Panther entries forever. The story bounces back and forth between Shuri’s plight, T’Challa’s comatose state, Wakanda’s battle and The Queen’s, mission, but the clearly defined artwork and layout make it flow beautifully. With the action coming thick and fast, this is one of those books you find yourself reading in one sitting, because it’s just that good. And it’s another fine addition to Black Panther’s legacy. Long may it continue… Chris Andrews