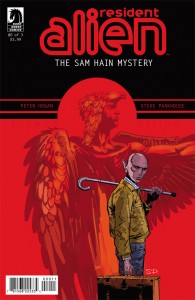 Resident Alien: The Sam Hain Mystery #0 – Peter Hogan & Steve Parkhouse (Dark Horse)
Whilst ‘Order of the Forge’  gives the impression of being the creation of excited fresh faced newcomers to comicdom, ‘Resident Alien’ is the work of old pros. Even though I was never particularly enamoured with Peter Hogan’s or Steve Parkhouse’s earlier work, the fact that they are still round decade later says a lot, and this imaginative little tale makes up in skilled storytelling and confident craftsmanship  what it lacks in youthful exuberance, with Parkhouse’s art, in particular, effortlessly flowing from page to page.

Dealing with a stranded empathic Alien in disguise, the foreigner in our midst is lucky enough to be able to pass for human, but still needs to be able to camouflage himself in society, for which he needs filthy moolah. Which, of course leads to Vegas where instead of turning into a filthy degenerate whoremongering gambler driving endless cocktails into himself, he just has a single  big win and pays off his debts which is a shame, as after this he just settles down to a life as a country doctor and not a great deal happens.  Perhaps the crashed alien probe he was sent to retrieve or the feds trying to trace him will provide further excitement in further issues, but so far this one is a slow burner. Don Doomcock