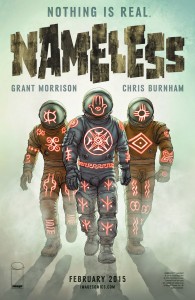 Nameless #1 & #2 – Grant Morrison, Nathan Fairbairn & Chris Burnham (Image Comics)
Never a dull moment with Grant Morrison MBE (Seriously Grant WHAT THE FUCK?) For someone who spews out more ideas in one issue than a lot of writers do in a whole career, there does seem to be something awfully familiar about this. I’m getting twinges of his past work; The invisibles , The Filth, even the weirder moments if his glorious Batman run , also partly co-created with Chris Burnham- a worthy successor to Frank Quitely who is actually caable of meting deadlines. Yeah, I know that line is a bit rich coming from me.  Go use yer Grannie  as a dildo ya wee cunt. I’m a fucking artist. This is in part at least due to his stream of consciousness post-post modern,  haven’t got a fucking clue what  the fuckedy doo-dah is going on storytelling jam,  which somehow still manages to be compelling and just a skip full of fun

The be-domed one always manages to push things and experiment with the medium. Sometimes he seems painfully self-aware of this, sometimes it feels strained, and sometimes maybe even he falls flat on his arse when he’s doing it, but he’s never less than interesting when he does so. And when he succeeds, well , he’s not regarded by the fan community as the sexy Alan Moore who doesn’t smell of wee for nothing. When he succeeds- which is often- he pops out a thing of terrible beauty like slouching towards Bethlehem to be born was second nature The basic plot is simple and familiar enough:  Occult expert drafted by shadowy elite to prevent imminent supernatural disaster. But of course we have Sir Grant’s (Seriously man, what the fuck? ) typically weird and wonderfully nightmarish  narco-pop-occult take on this. In this case it comes across like Alien channelling Lovecraft on an M-kat comedown in some fevered hypnopompic state.  Man I hate those lazy “a cross between ” comparisons, but that one was rather good wasn’t it kids? Fine. Fuck you. And the mangy dog you rode in on. It’s not everyone’s cup of tea, but man cannot live on tea alone. Fuck PG Tips too. And their fucking monkeys. Don Doomcock