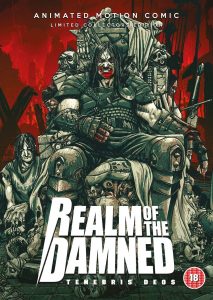 About a year or so ago I interviewed Alec Worley about Realm of the Damned, the graphic novel that he and his artistic partner in crime Pye Parr had created for Werewolf Press and he told me about the plans to transform it into an animated motion comic. After twelve long months of waiting for it to appear, it’s finally here. And you know what? It was worth waiting for. Set in a near future world that’s fallen prey to, and been taken over by, vampires, werewolves and all manner of other ghastly horrors and in which humanity is in the minority and soon to become an endangered species, Realm of the Damned tells the tale of Balaur, the embodiment of vampiric evil, raised from dead by a Norwegian black metal band in order to conquer the world and the thrice damned anti-hero recruited to defeat him, Alberic Van Helsing. It’s a vicious, viscera filled story, bursting with profanity, gore and mytholog that plants its foot firmly on the blood soaked accelerator as soon as the opening credits have finished and doesn’t let up until it crashes headlong, in an orgy of metal fuelled violence, into its finale. Barely an hour in length, it doesn’t outstay its welcome and manages to cram more story and action into its duration than most films twice as long could dare to dream about.

Realm of the Damned as well as being a full throttle, black metal horror extravaganza, is also a tale of redemption, about the lengths the most dedicated of men will go to in order to fulfil their objectives and how our own innate, inescapable desires will fashion our destruction and create the apocalypse we so richly, and rightfully, deserve. Being an animated film, its success rests as much on the strength of the cast as it does the story, and Morbid Angel’s David Vincent (as Van Helsing), Dani Filth (Balaur) and Huntress’ Jill Janus turn in an incredible  brace of performances. While all three are, given that they’re working in a medium that’s far out of their normal sphere of creativity, surprisingly good, Vincent is a revelation and should he ever tire of treading the metal boards, he could easily forge a secondary, successful, career within the medium of vocal acting.  Brutal, unrepentant and unforgiving, Realm of the Damned is black metal writ large for the small screen and, providing you have the stomach for its dread filled delights, is both oddly compelling and wholly enjoyable. Balaur has such sights to show you… Tim Cundle